I have not taken photos of my progress on the Heavenly Herald stocking in a while, but I have been working on it. I am pleased to say that the angel is almost finished! Except for the backstitch, that is. If the kids give me a bit of time tonight I should be able to finish up the last cross stitch part of her dress. After that, it is onto the rest of the sky, which should go fast since it is all half stitch. I can’t wait to get this stocking done!

The 2014 issue of Just Cross Stitch Christmas Ornaments is here! The price is $9.99 and it can be purchased from crossstitchers.com. 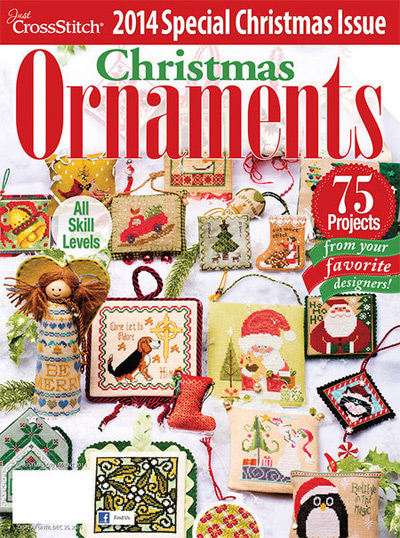 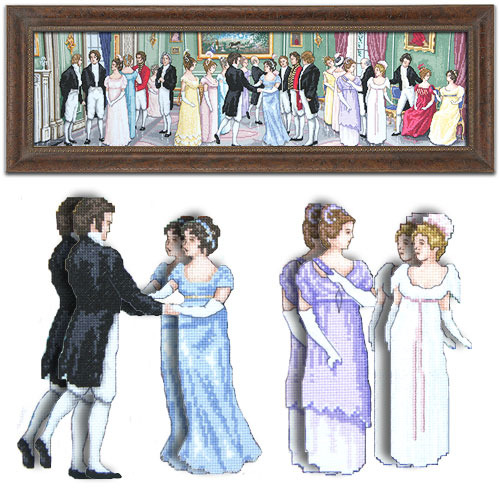 On gathering my materials for A Summer Ball by Sandy Littlejohns and Debra Lester, I noticed a few typos.

The chart can be purchased here.

I am so excited to be done with my first ever Hardanger project, and that it came out so well. There are a few little “whiskers” I still need to clean up, but other than that I am very happy with it. I think I will add a hanger at the top to make it into a Christmas ornament.

Here is what it looked like when the stitching was finished, but it had not been cut out yet: 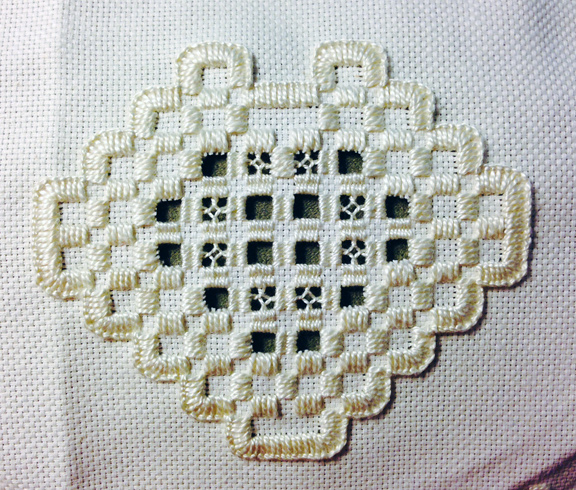 The only downside to being done with this is that I have to get back to work on Adrienne’s stocking. Christmas is in 3 months plus a few days! YIKES! 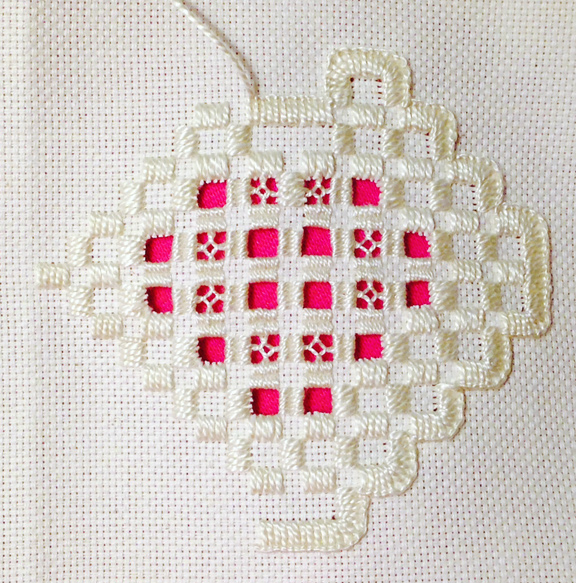 My Hardanger heart is coming along great. It’s almost finished, in fact. But I am having trouble with the buttonhole stitch which goes along the edge. This allows the piece to be cut out and not fall to pieces. I have looked at numerous books, websites, and YouTube videos. So far the most helpful has been this one. My main problem was that the pearl cotton #5 seemed too big to use, and yet the #8 seemed too fine. The pattern calls for the #5, same as the Kloster blocks, so that is what I am using. But it is not going well. I did manage to make my first row and then turn an outside corner. Yay! But now I have to do an “inside” corner. I have no clue what I am doing. Back to the video. For the third time. Maybe tomorrow will be better.

Here is my Hardanger heart with a couple of Dove’s Eyes attempted. It would have been nice if the instructions had told me I was supposed to complete them as I was doing the wrapped bars, instead of after. As you can see, I had many of the wrapped bars done already. Instead of taking them out, I decided to just add the Dove’s Eyes after. I think it turned out okay. 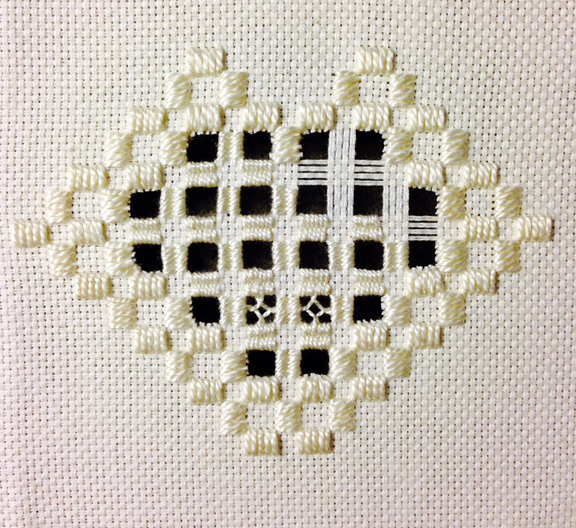 And here is the result after all of the Dove’s Eye stitches and wrapped bars have been completed: 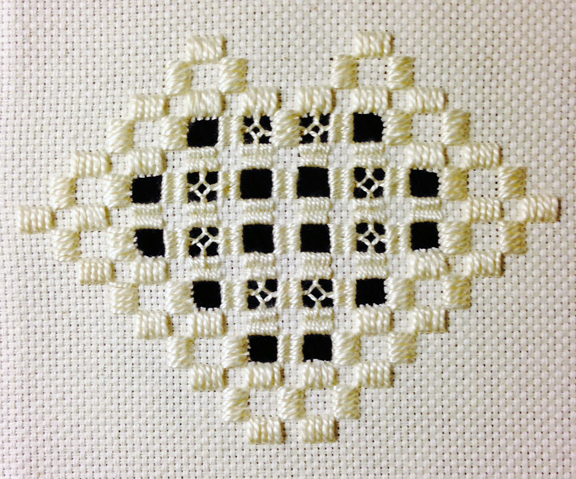 All that’s left now is the Buttonhole stitches around the edges!

At the end of July I wrote about trying out Hardanger. I had to stop after the kloster blocks because I did not have suitable scissors for the cut work. Well, I have found a pair that work and after a few tense moments, made my first cuts. I was having a terrible time trying to get the point of the scissors into the fabric, and then I decided to take the project out of the hoop. Eureka! Why don’t any of the Hardanger tutorials, either online or in books, tell you to do this? Holding the fabric loosely helped immensely. After the cuts were made, I used tweezers to pull the threads out. At first it was very difficult to know what to yank on and what to leave alone. But then I used my fingernail to rough up the cut areas and this made the cut threads stand up. After a few threads were pulled, I had the hang of it. Here is what the heart looked like with just a few horizontal threads removed: 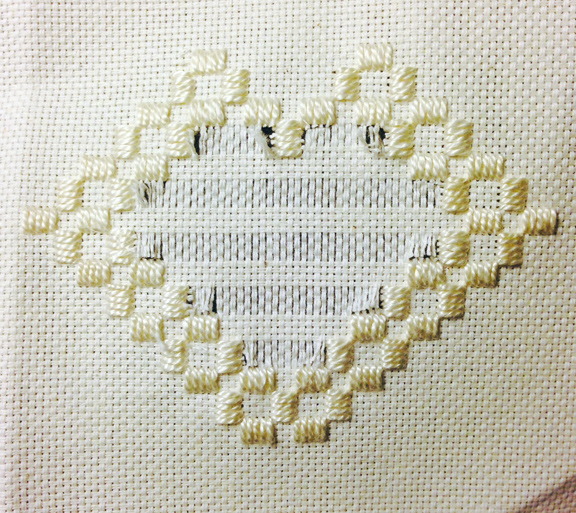 It was quite hard on my hands to do all of the cutting. During the process I was not sure I would want to attempt Hardanger again. After all the threads were removed, this is what it looked like: 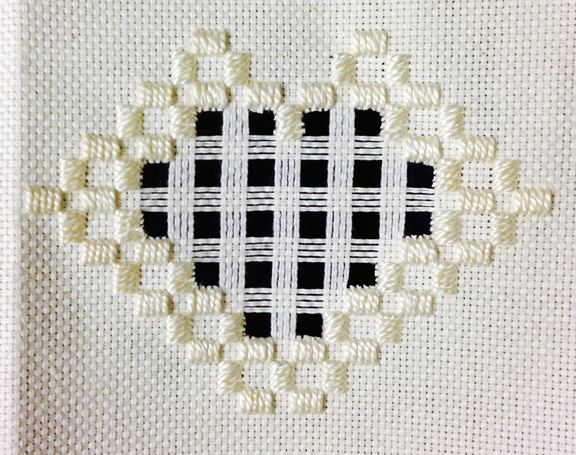 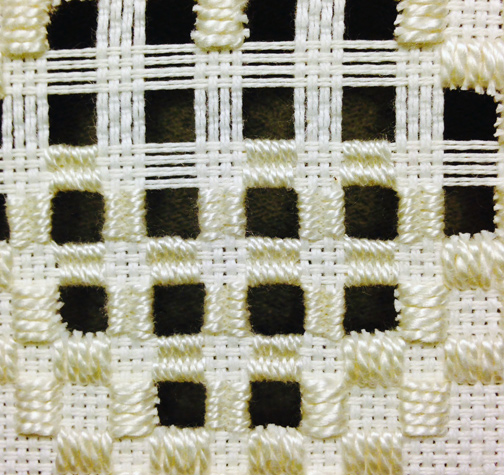 After the needleweaving is complete, the empty spots will be filled with Dove’s Eye and the edges will have a buttonhole stitch done around them. This will allow the heart to be cut out without falling apart.

You can get the scissors I use from crossstitchers.com

I didn’t get any stitching in yesterday but I was lucky enough to finish this tonight. I played around with a couple of frames that I have (it’s a standard 5×7 size) but nothing looked right. I think I might do a flat-fold ornament finishing on this one. 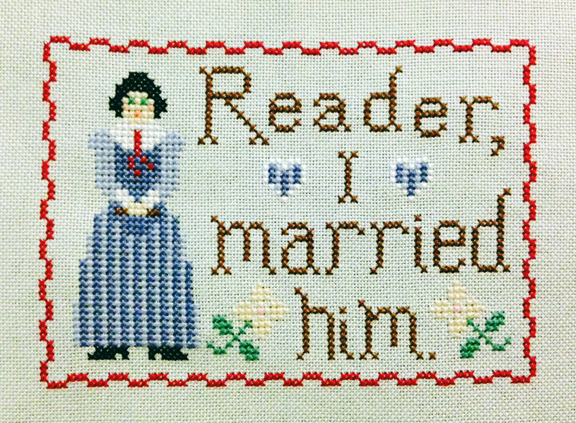 Unfortunately, my camera just can’t get an accurate picture of the colors in this one. Hopefully when it is finished I will be able to get a better photo. 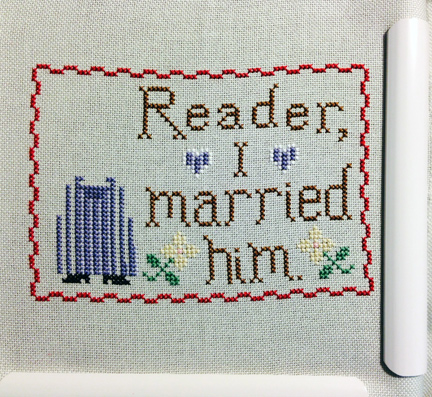 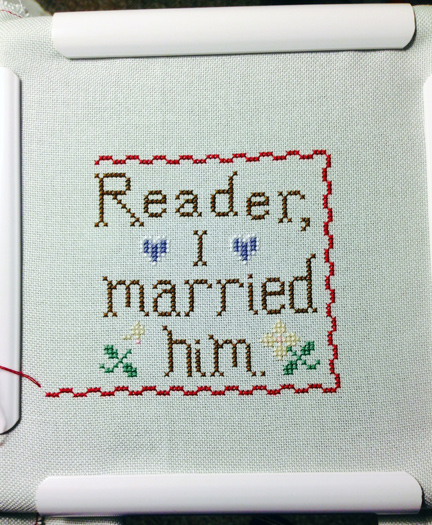 I think this is stitching up rather well. And quickly, too. It is hard to get a good photo of this one with the fabric color coming out accurately. It is Jobelan fabric and the color is a sort of light green. The previous photo looks as if the fabric is white. 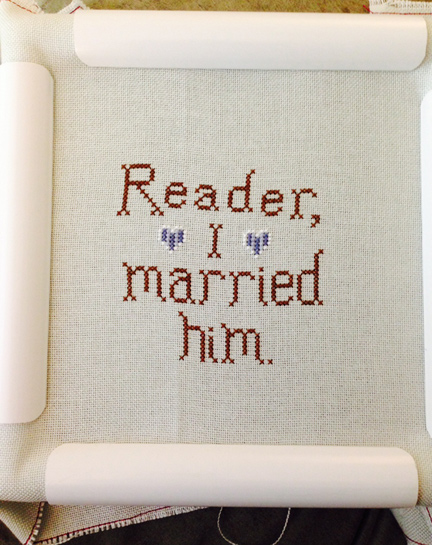 Ah, one of the most well known lines in the history of English literature: Reader, I married him. I have been alternating between the Christmas stocking and gridding the Summer Ball project, and was getting bored with both. Luckily I finished the fabric gridding over the weekend, but I wasn’t ready to get back into the stocking yet. I had this project kitted up for a while, from a free pattern I found online. I decided to start on it, and it is going along nicely. The quote, of course, is from Jane Eyre.

This weekend our local Boy Scouts had their annual Labor Day yard sale. We were at the gates, waiting for it to open at 8:00 a.m.! As soon as they let us in I made a beeline for the picture frames, as I am still on the lookout for more square frames. I made out with over a dozen great frames, and then hit Hobby Lobby for some foam board. The kids start school on Wednesday, so after a few days of playing catch-up on work, I might have time this weekend to finally get some of my 37 finished projects framed. Yes, you read that right. Thirty-seven unframed, yet completed pieces. Most of the frames I bought second hand will need to be cleaned and then painted, and I am still working on gridding the Summer Ball fabric. And of course, Adrienne’s Christmas stocking is always begging to be worked on. There just aren’t enough hours in the day to get all my stitchy stuff done!