I was so excited to find a DMC wooden floss cabinet on Facebook Marketplace a few months ago. It was in pretty good condition and the seller only wanted $9! The drawers did not contain the plastic divider inserts to separate the floss, but I knew I could pick them up online. But when I tried to order them, they were either sold out or no longer for sale from the distributors I had used before. But I placed an order with Wichelt Imports and they did eventually get them back in stock. The inserts were $4 each so I have $21 into this cabinet now. But new ones sell for $155 on DMC’s website, and they are never in stock. What a score! The seller called it “storage” was using the drawers to store sunglasses! 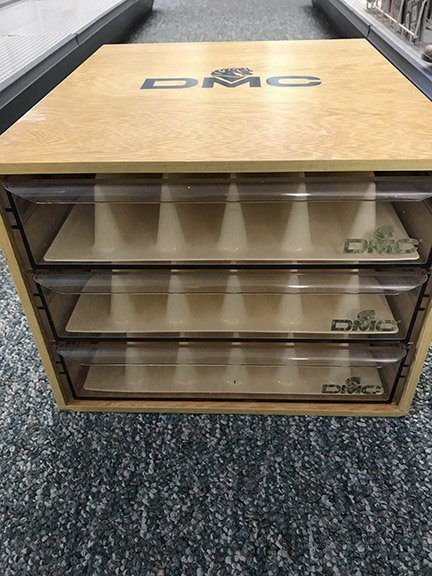 I have not been able to cross stitch much at all in the last few weeks. After several months of being closed down due to COVID, all of our family’s doctors offices have now been calling to schedule appointments that were missed since March. It seems like every week we have at least 3 appointments, and there doesn’t appear to be an end in sight. One appointment I am looking forward to is the eye doctor… I have started taking my glasses off to see things up close, like my phone, which is not like me at all! I can’t really see anything without my glasses on, but now I am getting to the point where my glasses aren’t working for seeing far away OR up close. My doctor warned me a couple of years ago it was getting time for the dreaded “b” word, but I have been lucky enough not to need a prescription change (until now). I think it is finally time for… *gasp*… bifocals!

This Americana project has been fun, but the white stitching is just not working at night time even with my beloved task lamp. It is much more suited to daytime stitching, but I don’t really have the option to stitch during the day. So I have been struggling to get it done a little bit here and there, in the evenings when everyone else has either gone to bed or is watching TV. I am slowly but surely plugging away at it. 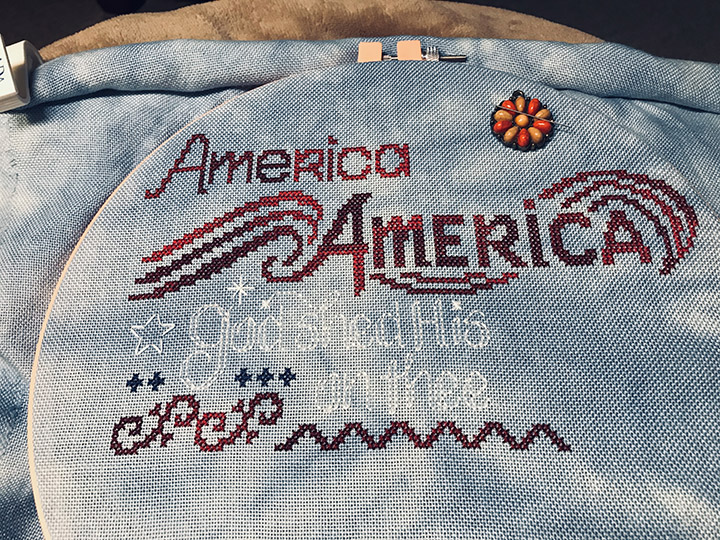 I fell in love with this project by Ursula Michael as soon as the August issue of Just Cross Stitch magazine came in the mail. 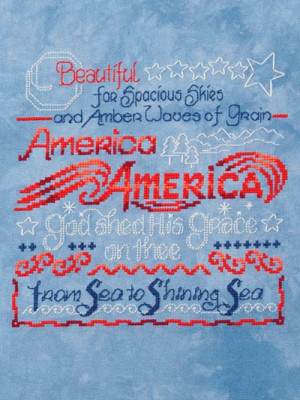 I knew I had some blue hand dyed Jobelan called Babbling Brook that would work out perfectly, and I decided to make this project even easier by stitching all of the red with DMC variegated floss instead of three separate shades of red. This way, I wouldn’t have to stop and change colors every few stitches. I played around with different colors of the variegated shades and color variations, and and finally settled on DMC 115. It is a bit darker shades of red instead of the really bright reds used in the magazine, but I think it will look great. 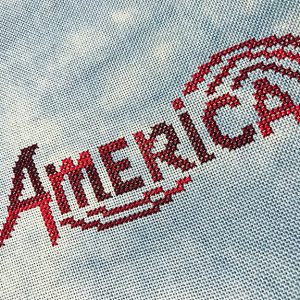 The coloring from the camera doesn’t show off how great this actually looks. This part stitched up pretty quickly and I can’t wait to get to work on the rest of it! I am going to have to do a bit of tweaking on the design, though. The wording is charted as “and amber waves of grain” but it should actually be “for amber waves of grain”. My OCD would never let me stitch this with the wording wrong, so I am going to have to use the word “for” from the line above, and just move the entire bottom line up so that it doesn’t run into the word “America”. When I get to that part of the chart I think I will stitch the amber waves line first, then work my way up from there.