This bunny is really getting on my nerves. I thought it would be a quick stitch but it is going so s-l-o-w-l-y! I am tempted to quit but I really want to finish my Thread Heaven trial. So I guess I will keep at it. But the thread colors all look the same, there are half stitches mixed in with full cross stitches, and I am sick of trying to pierce the Aida blocks with the completely rounded tip needle the kit supplied. I will be so happy when this is done! 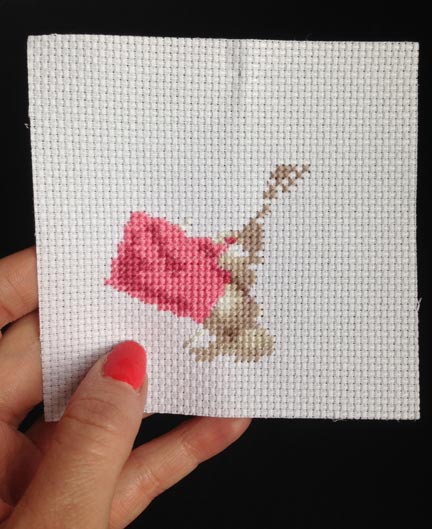 I have decided to finally set up an Instagram account, but it will be cross stitch related only. I wasn’t thrilled about setting up an account because the pictures are completely public, but I figure if it is just stitching related there can’t be much harm done (have you seen some of the stuff people put on there?!). I will be posting pictures of my completed projects, along with stitching products I can’t live without, and maybe even stitch diagrams or examples. The next thought, which has been in my mind for several years, is to start video tutorials on YouTube. But I don’t have a great camera, and I am very intimidated by the editing people do to their videos. I’m a cross stitcher, not a movie maker. Yet I have often searched for things there that I know how to do – like french knots – and been unable to find any really GOOD videos. So I feel it could be a great service to people to help them learn something that I am good at. That might be something to think about setting up this summer.

Here is the start of the project I am doing to try out the Thread Heaven. It is a card kit from The World of Cross Stitching and it features Bebunni. I’m normally not into cutesy type projects, but this had just come in the mail and it looked like a quick stitch. 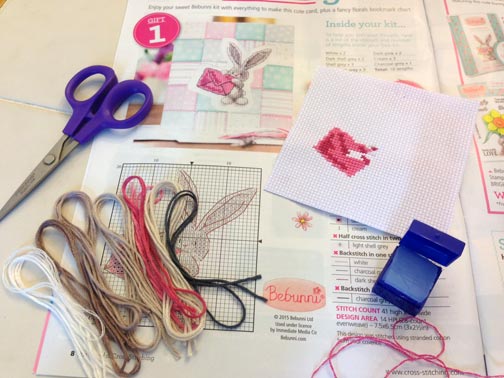 Hopefully I will have it done by the end of the week. The Thread Heaven, while time consuming to use, makes the floss glide through the fabric nicely. I am really enjoying using it.

Nothing is worse than constantly having your embroidery floss tangle and get knotted while you are stitching. Luckily, there is a product on the market called Thread Heaven which not only claims to prevent thread tangling and fraying, but also to reduce hand fatigue. 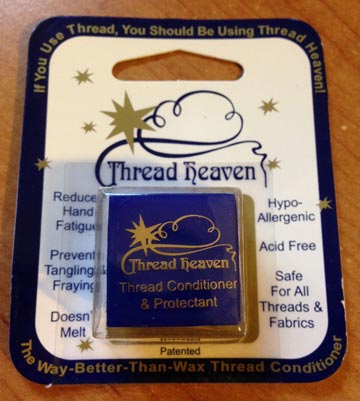 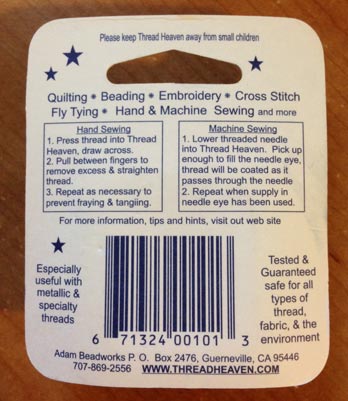 Adam Beadworks, the manufacturer of this product, has been marketing it for years for quilters, but more recently cross stitchers have found that they just can’t live without it. For a while I was skeptical that it would work, and certain that it would damage the fibers or fabric. I have been selling it in my store for a few years, and it is one of my best sellers. But I just didn’t want to try it myself. Finally I decided to have a go at stitching with it and this is what I found. 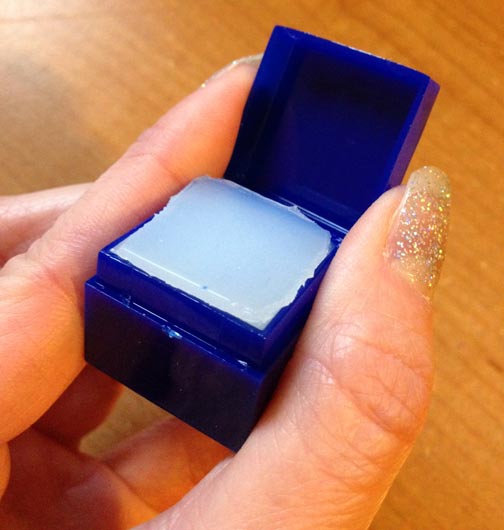 Fresh out of the package

First, I was surprised at how the product does not actually coat the floss. I figured after wiping a strand of floss across the Thread Heaven it would be all goopy or waxy. But you really can’t tell it is there. So then I wondered if it would actually do anything. When I stitched with it for the first time, I was amazed at how it went through the fabric smoothly instead of being drug through it. I have only stitched with several thread lengths so far, but I can definitely tell a difference compared to when I have not used it. The only downside so far is that it is time consuming to coat each strand (you are supposed to do each strand separately, then recombine them) and it is a bit awkward to use because the container is so small. But I will keep at it and report back here when my project is finished. I started a new small card kit just for the purpose of trying out the Thread Heaven. I did not want to start using it midway through a project.

One thing the Thread Heaven website does mention is that a separate box should be used for light and dark colors. If the product gets really gunked up with floss, you can pry it out of the box, turn it over, and put it back in to use the other side of it. Also, you should not lick your floss (a habit I personally have) because the mouth is very acidic.

There is debate among stitchers whether Thread Heaven has glitter in it. Some say that they can’t imagine having a box of it without the glitter in it, as it makes it “heavenly”. Others say that they have used several containers of it and have never once had glitter in theirs. The box I opened up is from my own shop and since I sell so much of this stuff, I know it is “fresh”. At first glance the product did not seem to be glittery, but when I took a closer look I could indeed see microscopic pieces of what appeared to be glitter. So my guess is that the glitter has either gotten smaller over time, or those who think theirs doesn’t have it just never noticed it before. 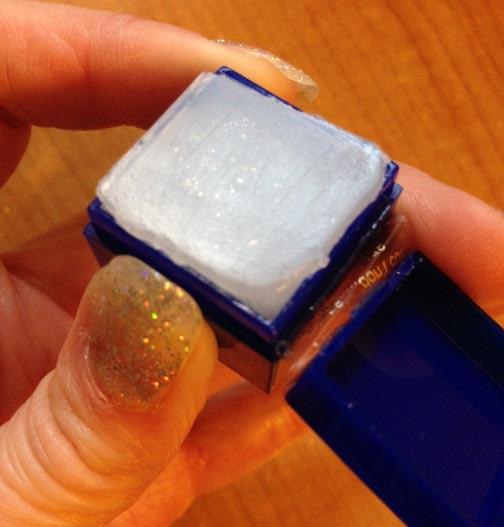 The glitter in Thread Heaven kind of matches my nails!

You can purchase Thread Heaven at my store, www.crossstitchers.com where it retails for $3.39.

Here is the finished sachet, bumpy edges and all. The more I look at it, the more disappointed I am. I know I can be a perfectionist, but the part that was sewed shut at the bottom just looks so bad. I wouldn’t be surprised if one day I rip it apart, add more stuffing, and try again. 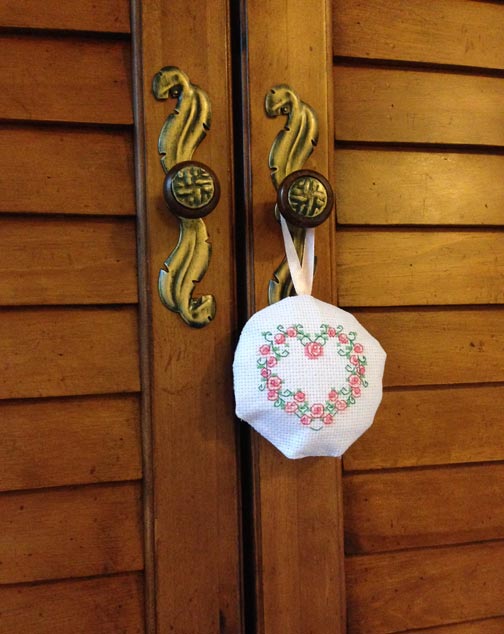 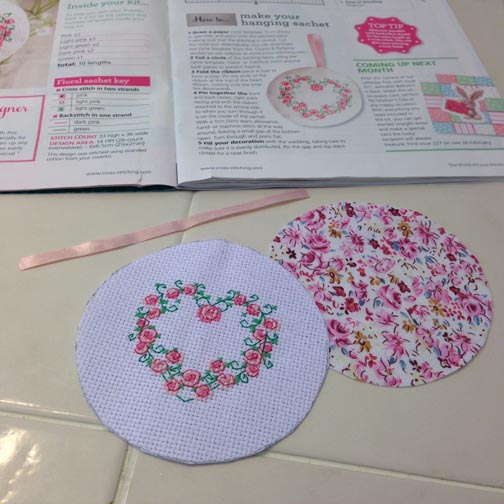 I finished the sachet today, although I am a bit bummed with how it turned out. The stuffing didn’t fill out the entire circle, so it is puffy in the center and bare at the edges. It is also quite bumpy looking at the bottom where I had to slip stitch it closed. The rest of it turned out fine because I used my sewing machine, but I had to leave a pretty big gap at the bottom so I could turn it right side out. It looks much better when I flatten it down with my hand, so I have put a heavy book on top of it and I think I will let it sit for a couple of days to see if that helps.

I’ll post a photo of the finished piece after I let it “flatten out” a bit. 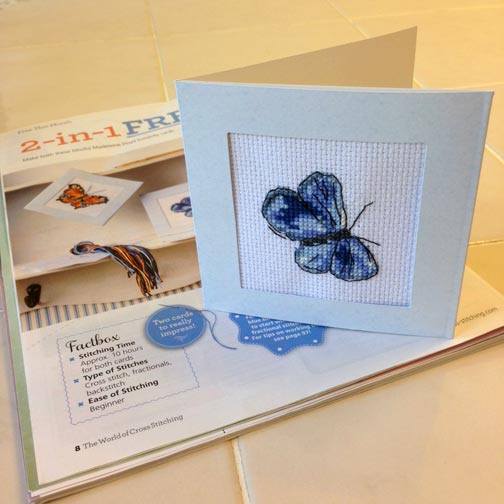 The stitching on my floral sachet is done, but I didn’t feel like getting out the sewing machine and putting it all together. I had this free cover kit from an issue of The World of Cross Stitching which consisted of two butterfly cards. I decided to work on one of them for another quick finish. I think it turned out quite well! The cross stitching itself was very easy and took only a couple of hours to do. The backstitching was a pain, as is usually the case with Madeline Floyd designs. But in the end it turned out very nice. 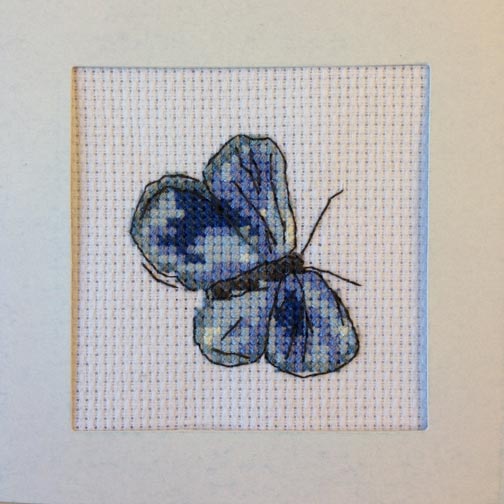 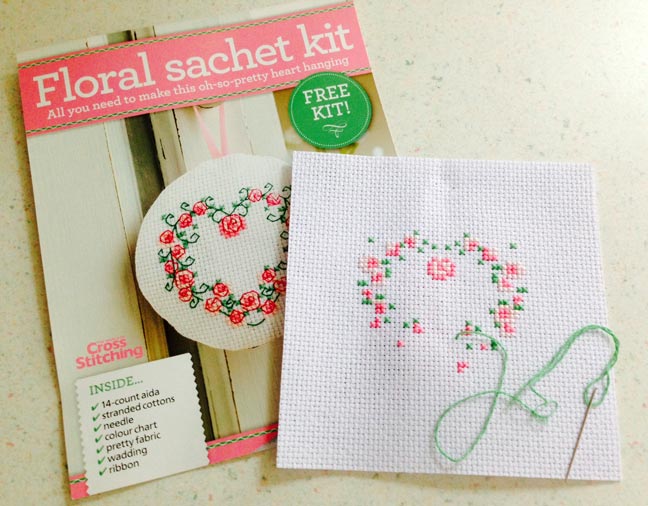 Yesterday I decided to take this kit along with me in the car, to work on while I waited for the kids to get out of school. The parking lot is really small, and the only way to ensure you get a spot is to arrive 15 minutes before the bell rings. When the weather is warm I don’t mind walking, but all winter I have tried to get a close spot. Normally I take a book or magazine to keep me busy but this little design was just calling my name. I am pleased with how much I got done while waiting and also in the evening before I went to bed. I took it along with me again today. I had never really cross stitched in the car before, but it was easier than I thought. I just took the floss, fabric, a needle, chart, and a pair of scissors in a quart sized freezer bag. This kept everything clean and in one place.

Here is what it looked like by the time I went to bed. 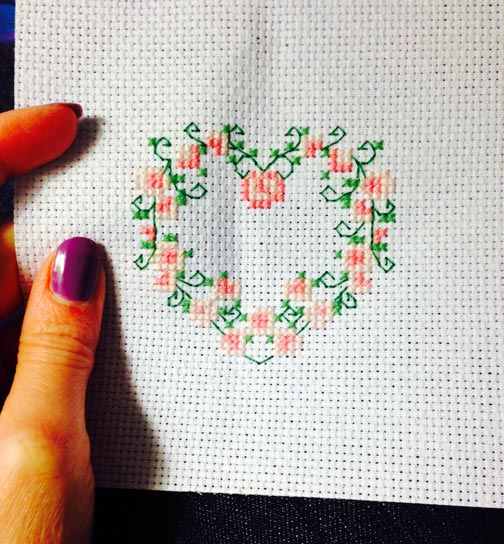 Easter Blessings! I stitched this Rejoice Sampler in 2008. It is from Cross Stitch & Country Crafts magazine, March 1996 issue. Unfortunately, I did not have a photo of the finished (framed) piece handy. 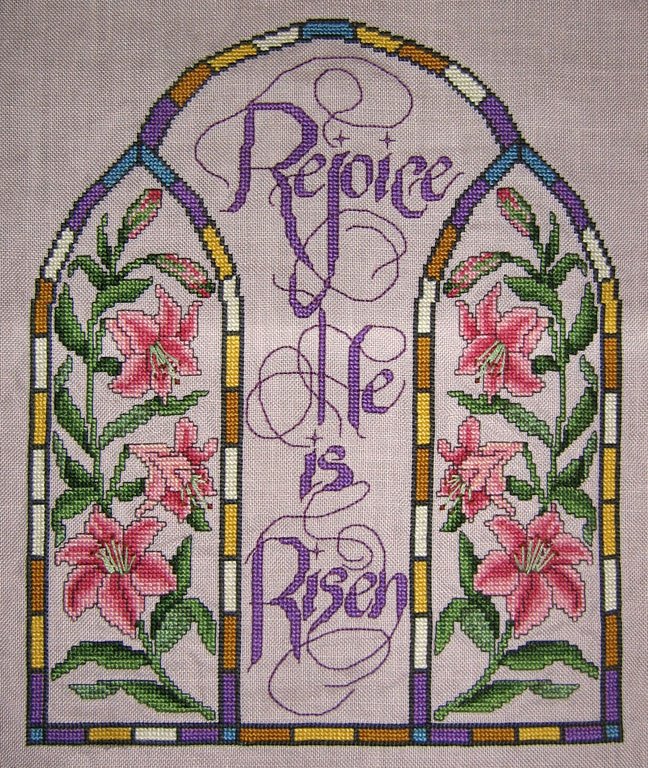 Today a new issue of The World of Cross Stitching came in the mail, and had a free kit with it for a floral sachet. I had also received an adorable kit of a hedgehog with the last issue, which I never got around to stitching. So that’s two new kits to add to my stash. And this year is supposed to be all about de-stashing! 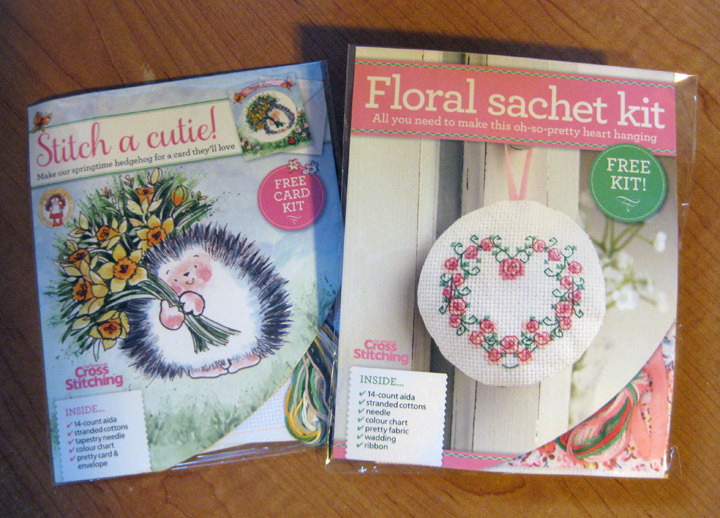 The hedgehog kit seems a bit daunting, but the sachet looks like it could be worked up in a day or two. I think I might tackle that one as soon as Nefertiti is done, just so that it is not taking up space in my “kits” tote, which is overflowing as it is. That wad of batting they give you for it is huge! Maybe putting some potpourri inside would make it smell nice. I really need to get these free kits stitched up. It is already April and I am kind of disappointed on the number of finishes I have done so far this year. I want to work on A Summer Ball too, but I think I will have to finish at least one small kit before I can get back to work on it. 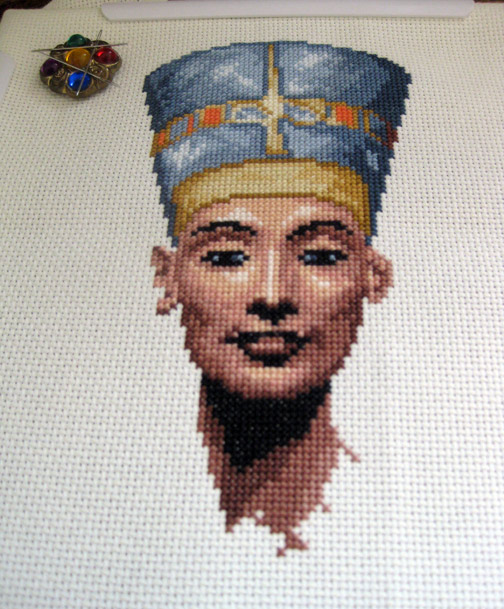 I am really happy with how this project is turning out. Later today I should be able to start on the blues and golds of her dress, which will be stunning. After that, there is a bit of background stitching that is all hieroglyphics and then Nefertiti will be done!