Back in November I posted about wanting to start this Bent Creek Happy Holidays chart but not knowing which fabric and floss color scheme to go with (you can read that post here). I ended up going with the pale green fabric and the red, green, and yellow floss. I think that choice was a winner! 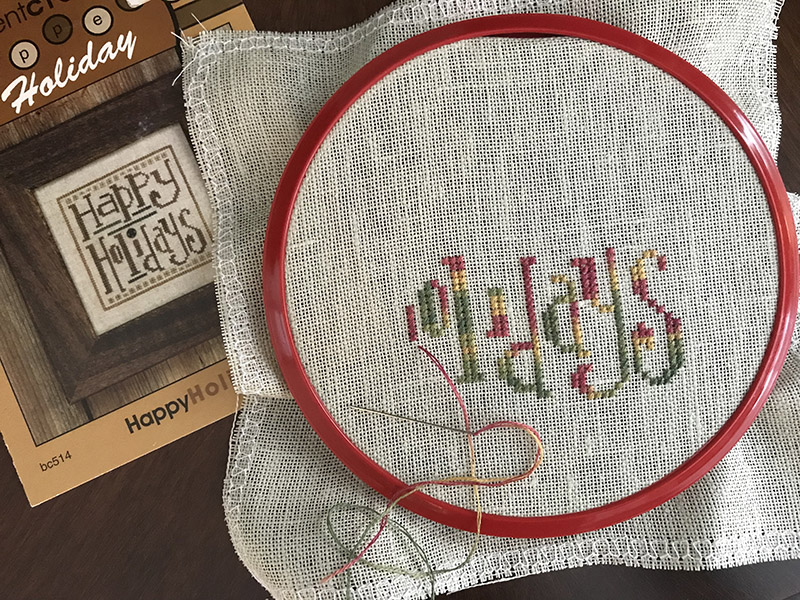 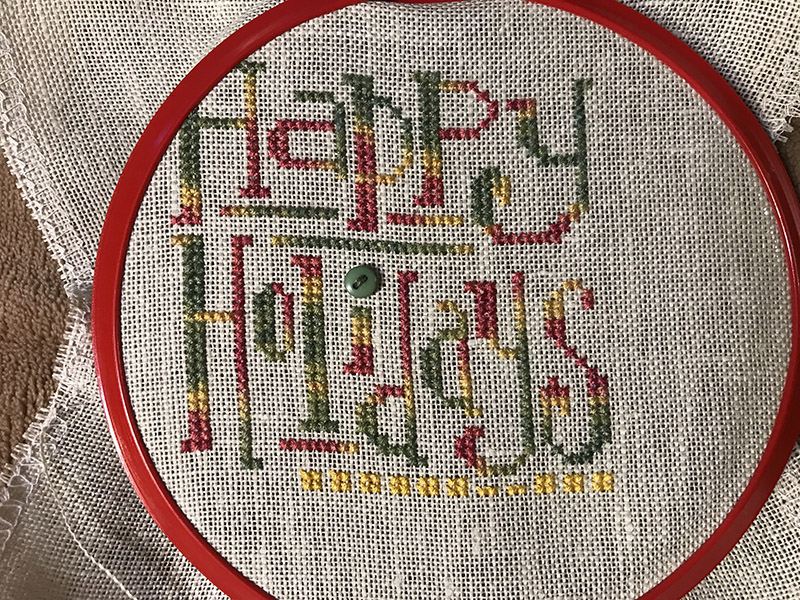 This piece stitched up very quickly. Instead of using the snap from the chart, I opted for a tiny green button from my stash. 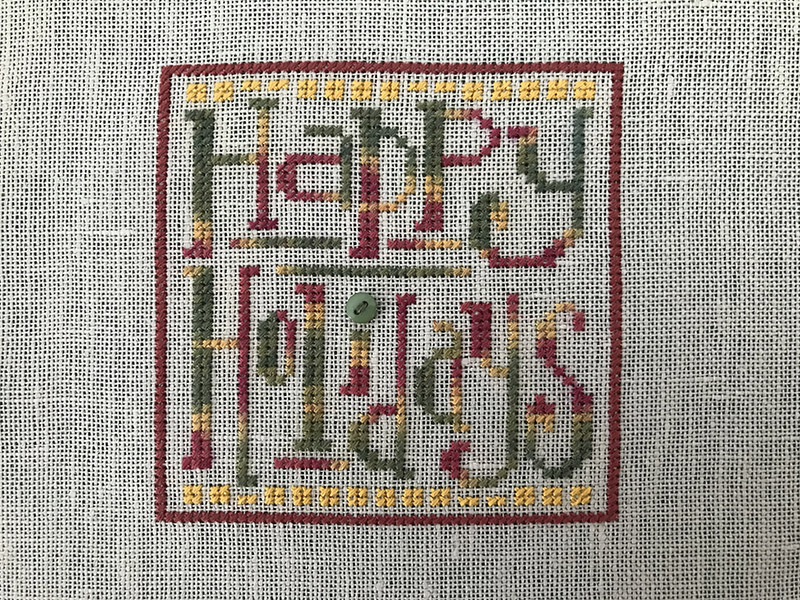 Because I didn’t want the Weeks Dye Works “Noel” floss to be too overpowering, I used regular DMC floss for the outer red border and the yellow blocks at the top and bottom. I think this was a great choice. They complemented the overdyed floss and made the lettering stick out instead of everything just blending in. 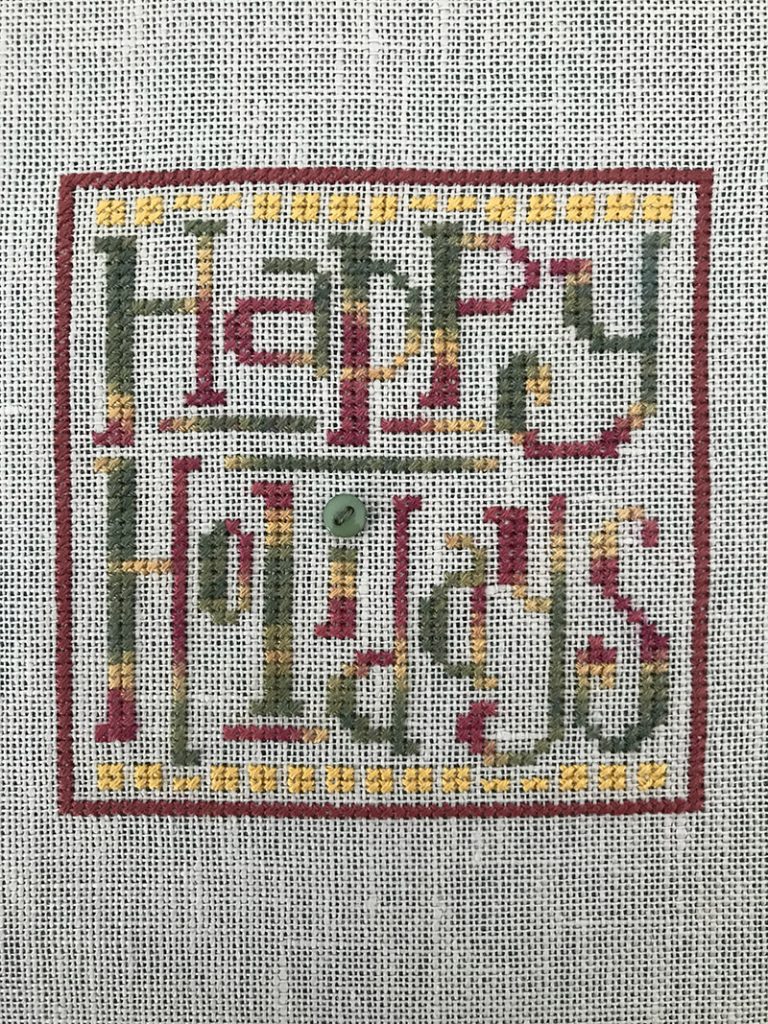 This will eventually be finished off as a small cushion or flat fold.

The other day my daughter was sick with a migraine and just wanted to sleep on the couch. My husband was out getting new tires put on our truck and the house was quiet. I decided to go through my small patterns that I had collected to make during my “year of smalls” and kitted up a bunch of them. Now whenever I need a project I can just grab one out of a basket. This will work well for when I will find myself waiting somewhere… in the car for a child to get out of school, in the doctor’s waiting room, etc. Each pattern is either a freebie found online from a designer’s Facebook page or something that was featured in one of the British magazines that I subscribe to via Zinio. The patterns are printed out and cut down to a small manageable size and put into a ziplock bag with a hoop, the needed threads, a pair of scissors, and needles.

I had already come up with the idea for needle cases out of old wax containers years ago, but while making up these kits I decided to make a lot more of them. Luckily, I had saved most of the containers that my son and I had received from the orthodontist during our years of treatment, and all I needed to do was cut magnet strips the correct size, stick them down into the cleaned out containers, and add needles. The magnet strip was found rather inexpensively at Walmart and comes in a roll, with adhesive on one side. If you have a child with braces, be sure to keep the wax containers! They are the perfect size for storing needles and can be thrown into the kits you make up. Two strips of the magnet positioned next to each other fills the container with a magnetic surface very nicely. 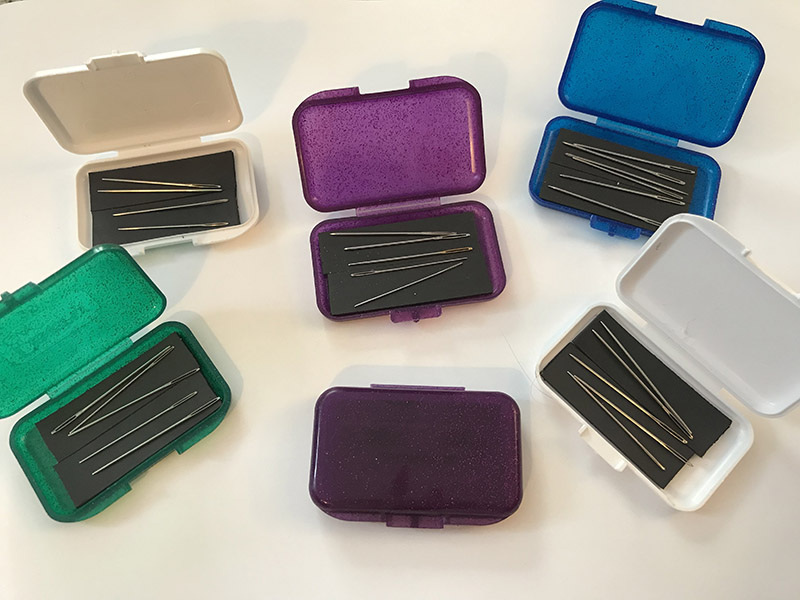 Since I did not have enough scissors to make up a lot of cross stitch kits, I went to Amazon and looked around. I found a great deal on these scissors which were marketed as nose hair trimmers! For only $8.99 for 5 pair, it seemed like a good bargain. When they came in the mail I was amazed at how sharp they were, and they are the perfect small size to add to my project bags. They are also inexpensive enough that if they get lost or broken it is no big deal. 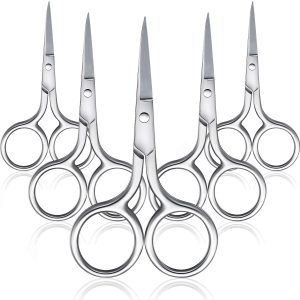 You can purchase the scissors here. Sorry, the needle cases are not for sale!

While looking through my stash for an insane amount of white floss to accommodate all of the snowmen I will be stitching, I came across this gem. I have no idea where it came from (I’m guessing a garage sale since I don’t wrap my partially used lengths around the skein like that). It is DMC, but it is labeled Neige instead of Blanc. I have never seen this before, and I have been stitching since around 1982! 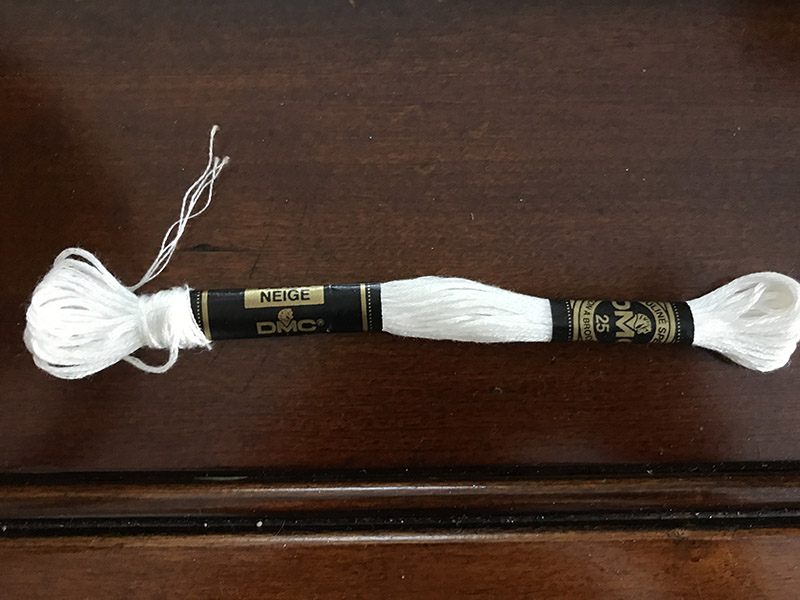 A quick Google search tells me that “neige” is French for snow! I wonder if this is B5200 floss, but they called it neige for a time before adding the numbers to it? I really have no idea. If you know, drop me a comment! In the meantime, I will not be using this floss for my snowmen projects; it is too cool to use (no pun intended)!

I had a fun New Year’s holiday spent stitching! This fuzzy snowman from Sisters & Best Friends was one of my favorite projects ever! It stitched up so quickly, in just a couple of days. And the embellishments are just adorable. 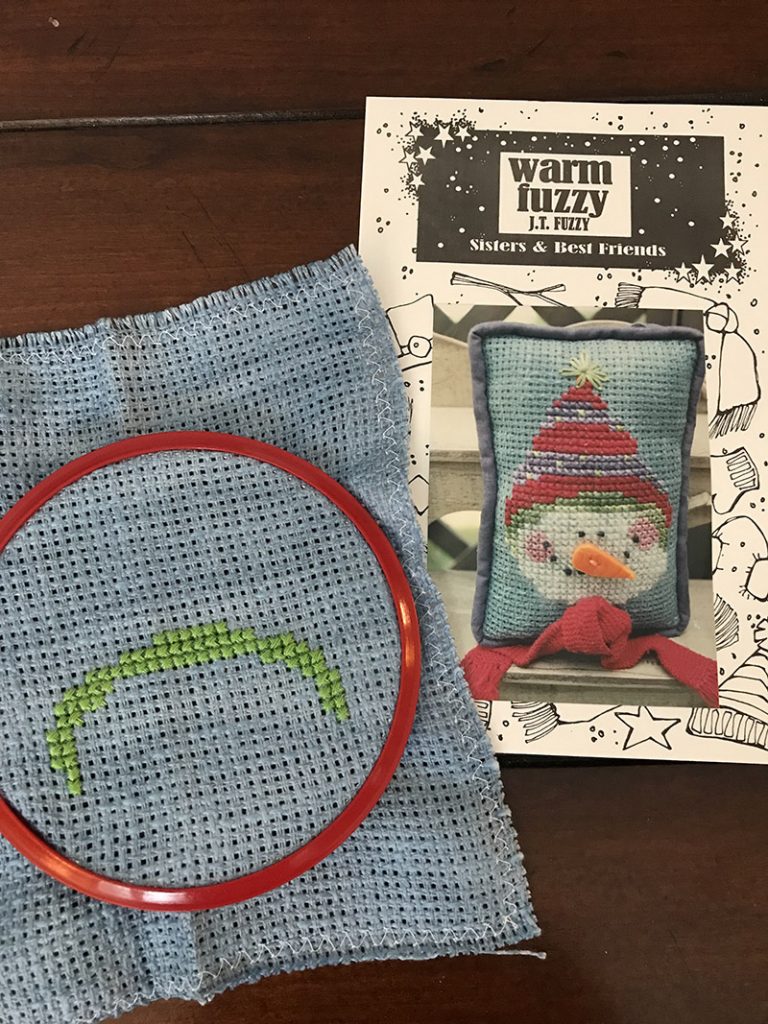 The chart pack contained the button nose and scarf, but not the threads or fabric. I used DMC from my stash and a piece of 7 count Klostern fabric from R&R Reproductions. My snowman doesn’t have the fuzzy feel to it like the stock photo, because I didn’t have the appropriate floss, but I think he is cute nonetheless. 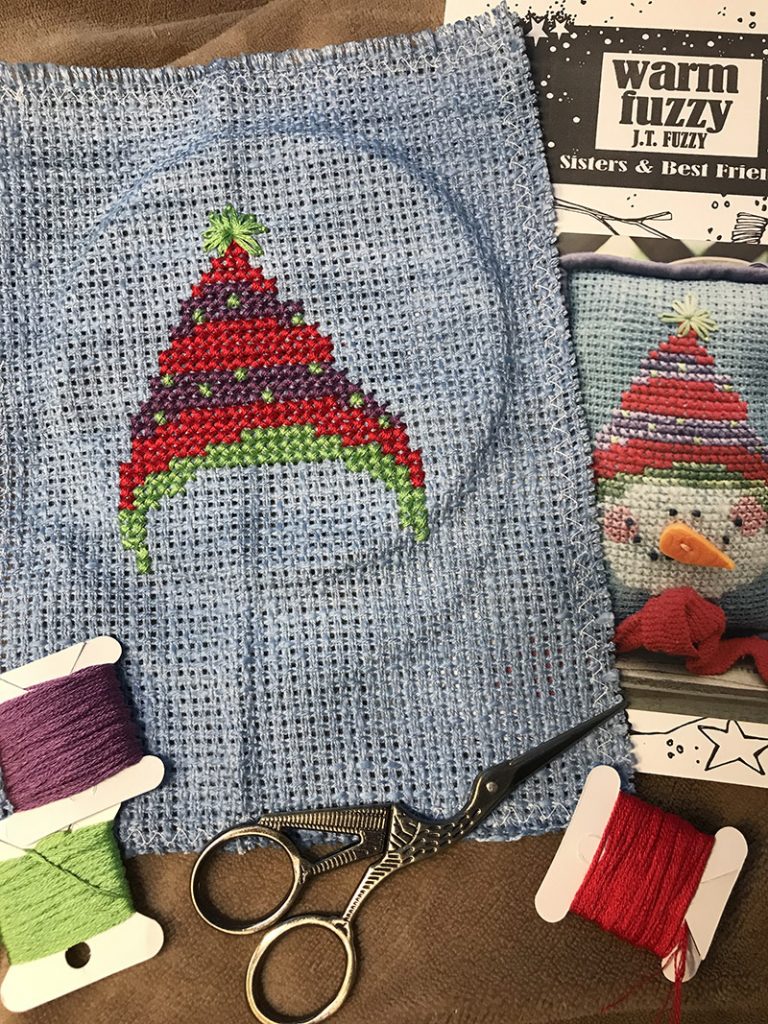 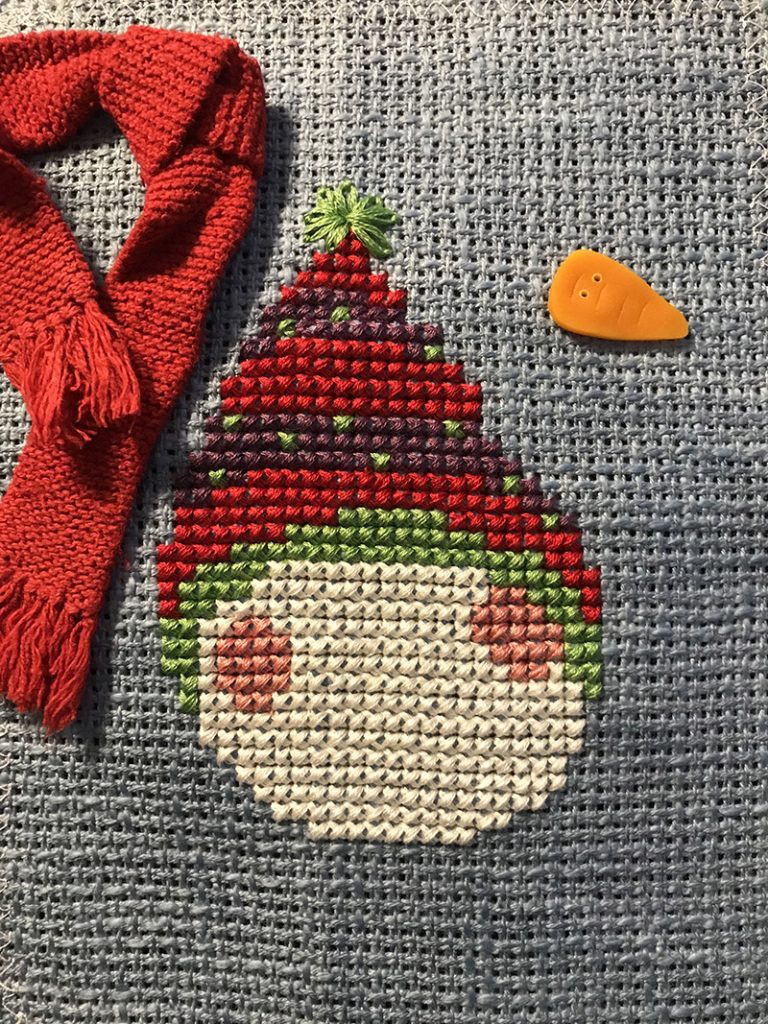 Although I don’t mind doing french knots, they can be intimidating when you have a bunch of them together all in one spot, as sometimes they don’t all end up the same size. I think these turned out OK! 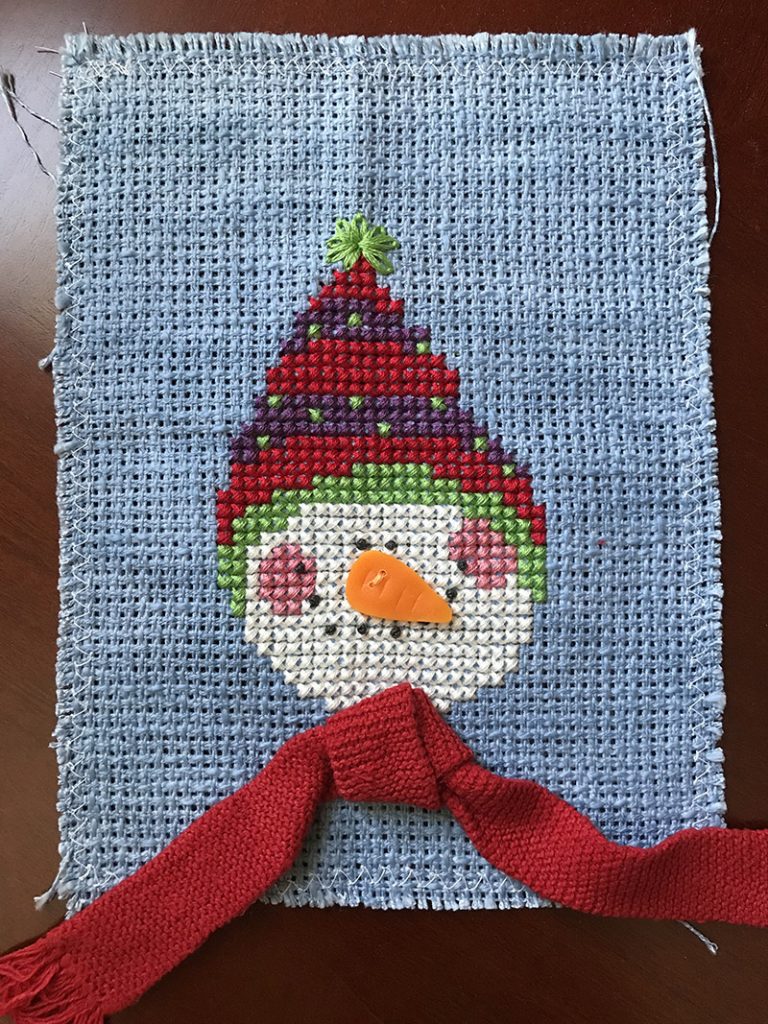 I can’t wait to get this little guy fully finished! I have a bunch more of these chart packs in my stash but I don’t really care for them, as they all have a theme, like summer or patriotic and I like my snowmen to be just “regular snow guys”. So I may try to unload the other charts off on a stash unloading page.