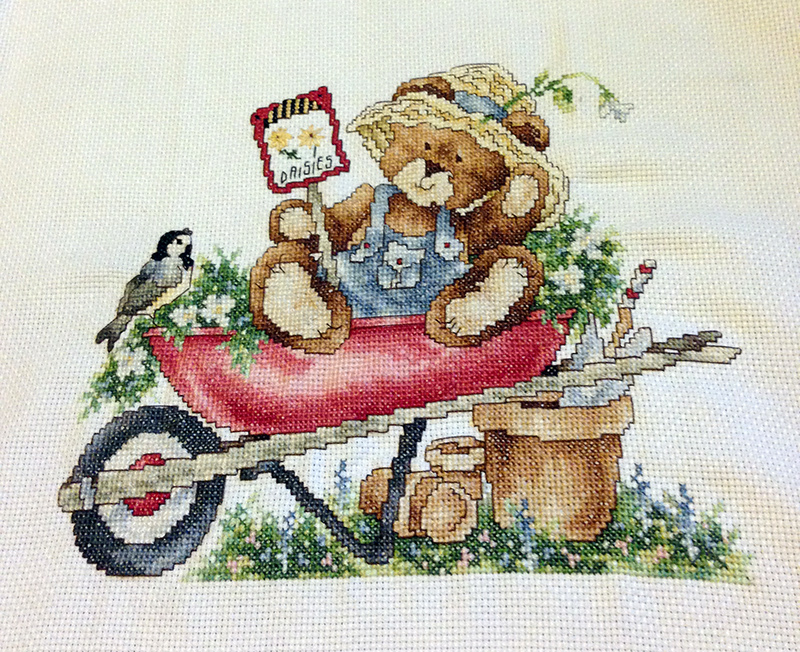 Yesterday while out for a walk we spotted a garage sale where everything was free. There wasn’t much left, as it had probably been quite picked over before we got there. But imagine my surprise when I found a box full of cross stitch goodies! There were a couple dozen leaflets from back in the 1980s, some folded up pieces of Aida, and even a finished, framed piece. I could tell by looking at it that it was a Stoney Creek design. Of course, I grabbed anything cross stitch related and went home to check out my new treasures. The framed piece was taped to a piece of cardboard and then put in a cheap frame with a broken piece of glass. I removed the stitched piece and will wash it, and then I will reframe it and hang it in my shop. I did a quick search on Google for “Stoney Creek cross stitch teddy wheelbarrow” and found the book it came from – Teddy Treasures, Book 158.

Another finished piece came from the booklet Something Special in Plaids and Monograms by T&N Designs Inc, Book 4. Copyright 1982! Ironically, it is a finished pillow cover with the name James, which is my husband’s name! But the date, 1991, means nothing to me. I have no idea what I will do with this. I am not sure if it was meant to commemorate the birth of a child, or to represent a last name. 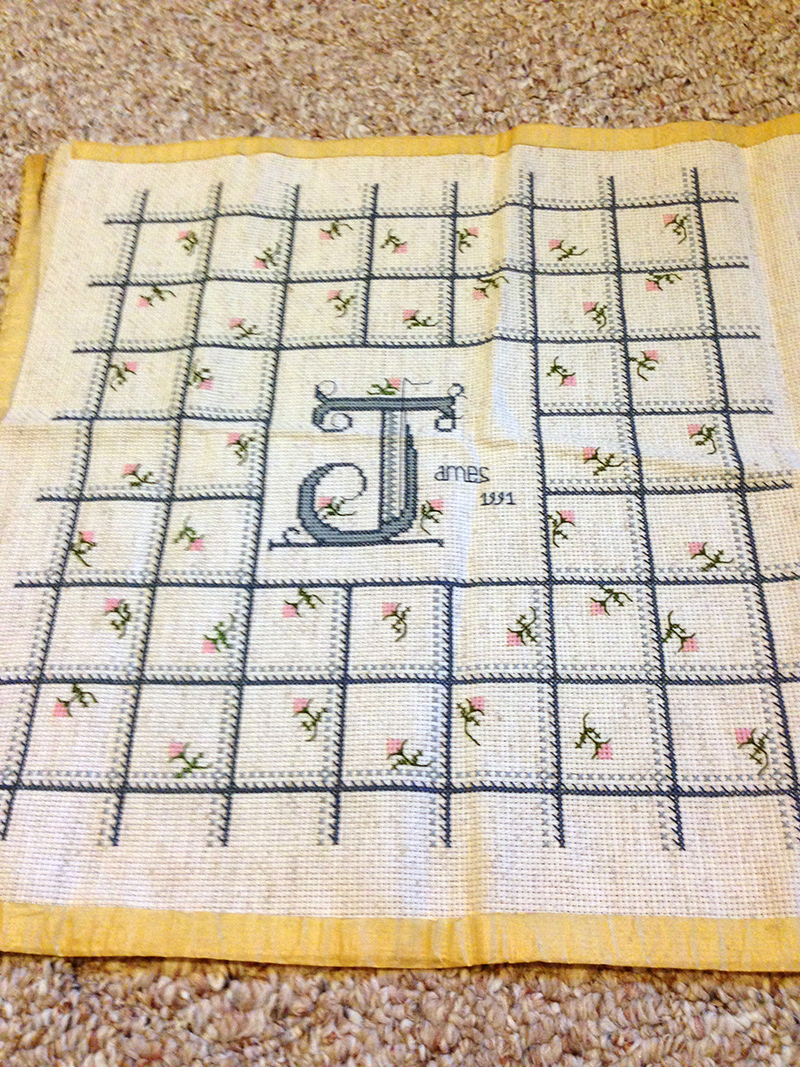 There was a barely started piece from the book Country Barnyard which I think I will just cut up and save the smaller unstitched parts for other projects. It is not my style, so I won’t bother finishing it. But the Aida is in good shape and should be fine after a quick washing.

There was another barely started piece, a sampler, which I actually would finish and frame, but the chart was just a photocopy and I actually don’t think it is all there. The top of the piece is the end of the alphabet, and no top border design. I have no idea what the piece is called, and could not find it when searching Google. I think I will post a picture of it on Facebook and see if anyone knows what it is. 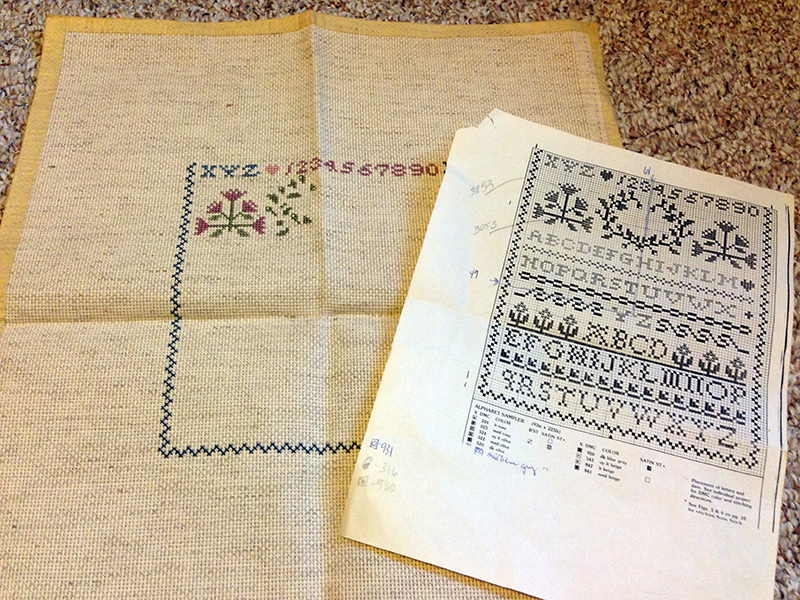 The last piece has a good amount done on it and I can tell it was stitched on Smoketone Aida. It is a sampler with an alphabet, some waves, and lightning. At first I could not find anything like it in Google, and then I decided to search for a Noah’s Ark sampler. It turns out that not only do the waves and lightning represent Noah’s Ark, but that the pattern was with the leaflets I got! It is the cover piece from Cross Stitch & Country Crafts magazine, Jan/Feb 1987. The magazine is in such bad shape, I didn’t even realize the pattern was there all along until I saw the images on Google. At first I thought I might finish this one, but now that I know what it is, I doubt that I will. It is a huge project and I just don’t have time to work on something like this. It is also done on fabric much darker than the magazine sample, and the pastel colors kind of get lost. I think I will probably cut the excess fabric off of this one, too. 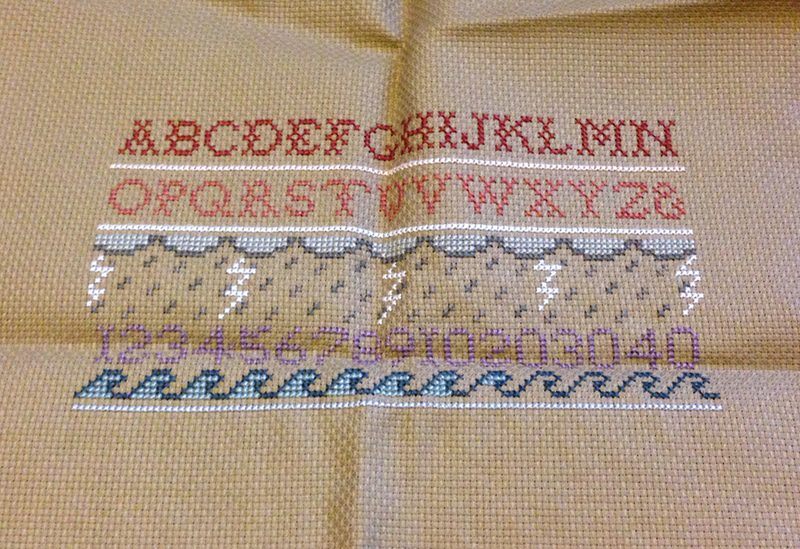 I don’t know the woman who owned these charts or stitched pieces, or why someone was giving them away for free at a yard sale. I do know that they had belonged to a woman named Julie Ziegler. I found a birthday card with her name on the envelope, and inside it was signed Jeremy, Jessica, and Travis (her children, I presume). The card came with “birthday coupons” for things like breakfast in bed and a day of housecleaning. None of them had ever been used. There was also a photocopied recipe with her name at the top. Perhaps she died, or just couldn’t see well enough to stitch anymore. Maybe her children had no idea what the items were. But I feel good knowing that at least one of her pieces will be “rescued” and put back up on the wall.

Also included in this set of goodies was a couple of small kits and a Dimensions stocking kit. It has been opened, but all of the materials are there and are in good shape. I don’t care for the design, and I don’t need to stitch another stocking anyway, but this will be a nice piece of fabric to add to my stash.

It’s always a great day when The World of Cross Stitching arrives. But this month has a great free gift – a thread cutter pendant! Now this is something I can really use. No more lost scissors! 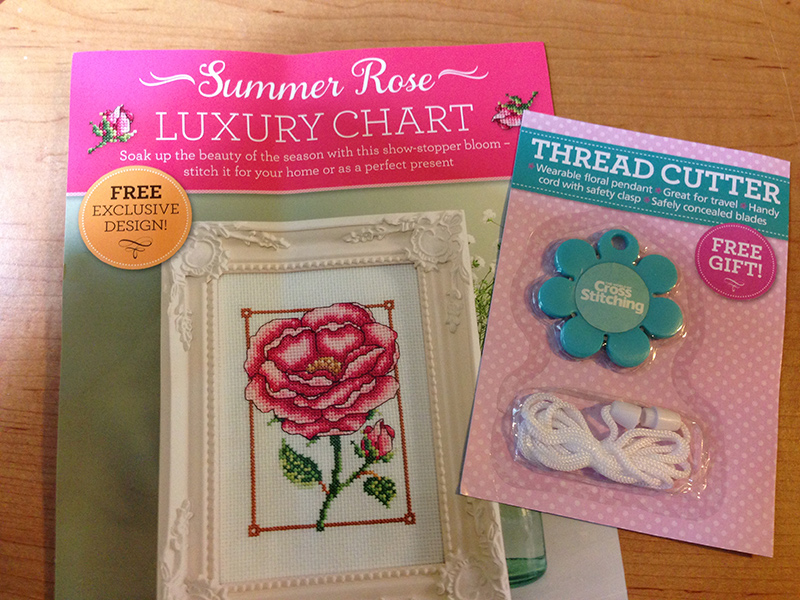 There’s also a great free design of a rose included this month. I love these bonus designs – they are printed nice and big, and on thick shiny cardstock. My magazines tend to get ripped up when I stitch from them, but these freebies are printed on a nice long lasting quality paper.

I haven’t had much time for stitching lately but I did manage to get in a bit of work on The Pyramids since I started it way back in May. The purple started to drive me crazy after a while, but now I have moved on to the pyramids themselves. I am loving how this is turning out. 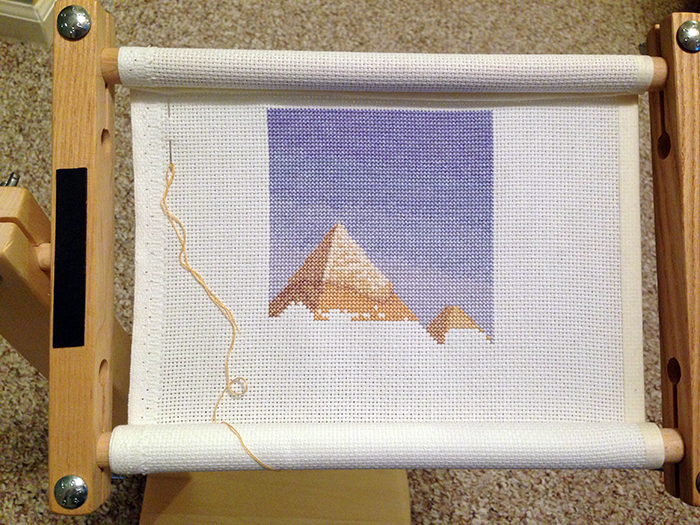