I had to start a new project. I found this great pattern in a British cross stitch magazine last summer, and have wanted to stitch it ever since. But I kept telling myself, no more new projects! But in the end I relented, and am loving this one. What is it going to be? Keep checking back to see! Here’s the first progress photo. 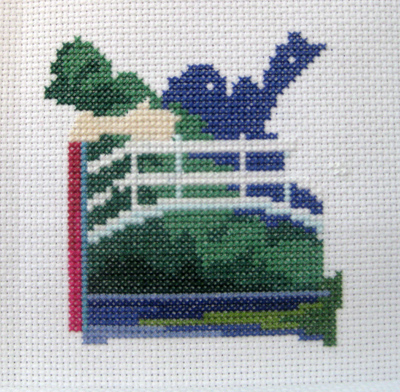 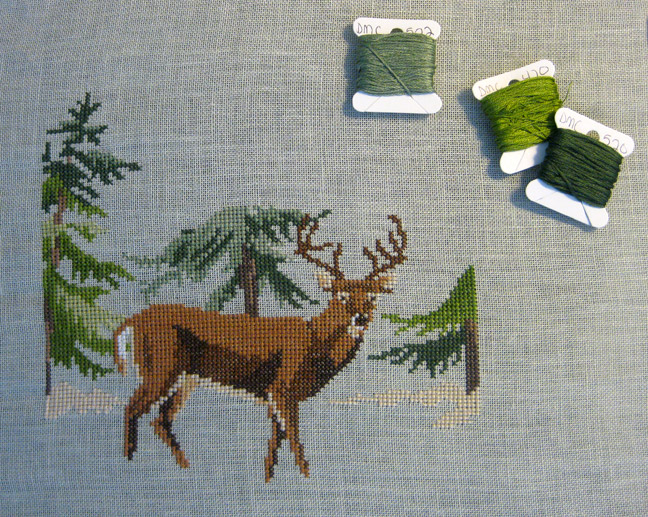 I have had a few days to work on this project and have finished the far left side tree. Now I am debating whether I should work on this some more, or put it away and start something new. I have a new project in mind (oh, who am I kidding? It’s more like a dozen projects) but I feel I should get a bit more done on this one before packing it away again. I know it will look great when it is finally done, but all those boring greens and browns…. ugh!

I’m not exactly sure what the difference is between a WIP and a UFO. I guess a WIP is something you are actively working on, and plan to finish, while a UFO is something that got started but then put away and will probably never be finished. I don’t know what category this deer would fall into. I started it not that long ago – late last summer, I believe. But after a while the colors just go so dreary, I had to put it away. The linen was getting annoying to work on, too. But now that I have finished up several new projects, I felt that I had to get this going again. It will hang in the cabin my husband is building, once it is finally built. He started working on that in 1996 and here we are in 2013, so I don’t feel there is any rush! But it would still be nice to be able to finish and frame this. Hopefully I will be able to get a good amount of this done before having to put it away again. Greens and browns are not my favorite colors, but we’ll see how it goes. Here is the “put away” progress photo. 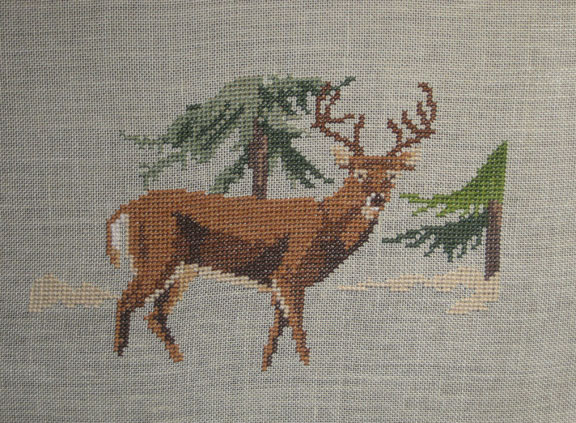 When issue 201 of The World Of Cross Stitch (British magazine) arrived in the mail, I knew I wanted to stitch The Colour of Love by Marjorie Massey. They had finished it as a pillow, but I will probably frame this piece instead. It was a quick stitch, taking just four days to complete, and was a lot of fun. It consisted of whole stitches only, in just one color. I used one skein of red floss from Rosace, which is a company I had never heard of but they had sent me a few sample skeins in the mail a while back. Here are the progress photos, 1 for each day of stitching. 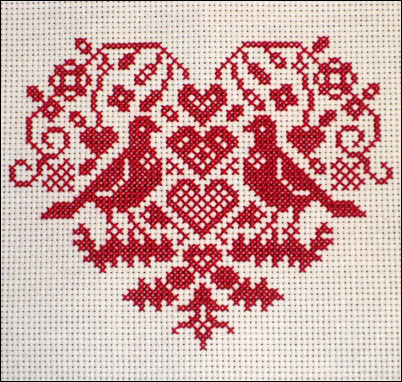 A few days ago I finished the border of Peacock Tapestry and snapped some photos. But before I could upload them, we had a bit of a disaster. Not with my cross stitch, thank goodness, but with the computer. Mental note: never, ever give your 3 year old a bottle of water to drink near the laptop. My kids are allowed to play on the computer, but drinks are a big no-no. On this busy night, however, I was washing dishes and my 8 year old son wanted a glass of juice. It was right before bed, so I only got him a small cup. My daughter asked for water, and it HAD to be in a plastic water bottle, not a sippy cup. She made that very clear. I told both of them, like always, “DO NOT SPILL!” While I was in the kitchen, the unthinkable happened. My son put his cup down next to the computer, with some juice still in it. My daughter, wanting to be just like him, did the same with her water. Everything was fine for a while, but then it happened. My daughter went to reach for something and knocked both beverages over. The juice went all over the coffee table and under the laptop, and the water went all over the keyboard. I quickly mopped up what I could, then turned the laptop upside down and put some paper towels inbetween the keyboard and screen. I also took the battery out. The next day the paper towels were wet, so I replaced them. When they stayed dry, I decided to try a reboot. The good news is, it rebooted no problem. The bad news is, the keyboard didn’t work. So I couldn’t even get past the password screen. I let it dry out another day, and tried again. This time a few keys worked, but most still did not. It has now been another day, and I think the keyboard is definitely fried. Fortunately, we had a wireless keyboard that was hooked up to the Wii (one of those things my husband HAD to have, but no one ever uses). I plugged that into the laptop and… nothing. It had been a while since it was last used, so I thought maybe the batteries were just dead. Thanks to all of my kids’ electronic toys, we had plenty of new batteries to choose from. Sure enough, that got the keyboard working. And now I can type on my laptop once again. It’s a bit of a pain, but at least the computer itself works and I don’t have to worry about all of my documents being gone forever. And now, without further ado, the finished Peacock Tapestry (well, the outer border, anyway). 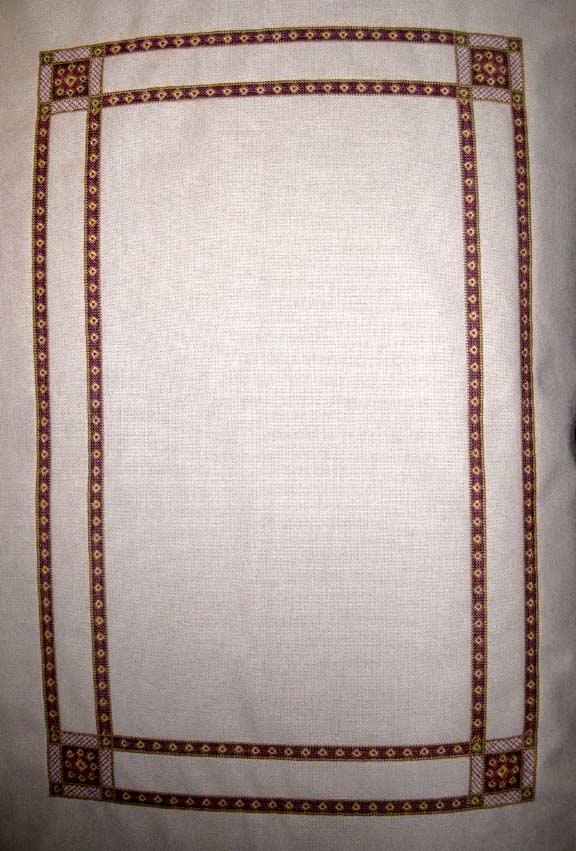 While doing some early spring cleaning, I found an empty vinyl zippered bag that I had purchased just after Christmas. It originally held makeup (you know how they roll out all those gift sets in November, and then sell them half price on Dec 26). Well, I had purchased this for the makeup inside, but couldn’t bear to just throw the bag out, even though I had no use for it at the time. When I rediscovered it, inspiration hit. Normally when I am working on a project I keep my threads, needles, and scissors in a ziplock baggie on the end table in our living room, next to the couch where I do all of my stitching. It’s not that I don’t have several of those nice plastic organizers that are made just for cross stitch, and hold a bunch of floss bobbins and accessories. Because I do. It’s just that they are all full. I pull out the skeins I need for a project, and label the container so I know what it is for. After you have used up a dozen of those containers, however, you find yourself running to the kitchen drawer to find something – anything – to put your stash in for your current project. I actually don’t have a dozen projects going at one time, it’s just that I tend to be lazy and not put anything away when I am finished with it. So I have several of those cute plastic organizers full of carded floss, that I don’t need any more because the project is done. Instead of taking them out and finding the time to put them back into my main stash (in DMC numerical order) I end up throwing the whole thing into an even larger tote. So when it comes time to pull threads for a new project, I usually can only find half of the colors I need (even though I know I have at least one of every DMC shade). 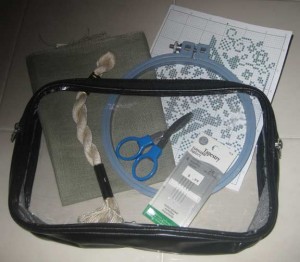 So for my next project, I am going to try something new. While ziplock baggies do work, they aren’t ideal for storing cross stitch notions. I think this makeup bag will do just the trick. It is large enough to hold my fabric, hoop, floss, needles, scissors, chart, and a colored pencil so I can mark off my stitches as I go along. It has a handle, so it will be easy to take anywhere, and it is see-through, so I know just what project is inside. And best of all, it was free (sort of). This newest project is only one color, so I don’t have to worry about putting floss away when I am done. The bag will then be ready for my next project. As for this project, that is going to be a surprise. I will reveal it here as it comes along. 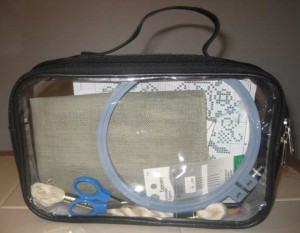 Here is the latest on the Peacock Tapestry. The border is so close to being done! If I can just get in one (maybe two) good stitching sessions I will be able to pack this away for a while. 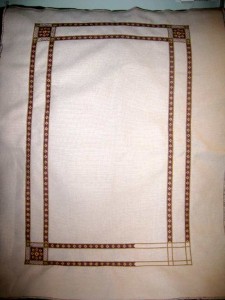 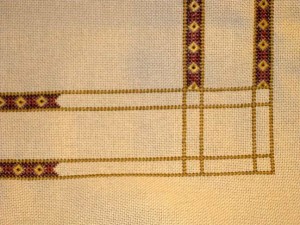 I’m so bummed; I can’t find the progress photos I took of this project when I first started it. I know they are on my computer somewhere, but I have no idea when I started this project (it could have been 4 years ago, it could have been 7 or 8, I have no idea). If I find them, I will add them here, but I don’t think I will be able to find them anytime soon, unfortunately.

[Update: April 30, 2013: I found the photos! And they have been posted here according to their proper dates. I started this in April 2011. Not as long ago as I thought!]

Recently I was doing a Google Images search for the Peacock Tapestry, to see if anyone had actually completed it. I found the website of a gal who was working on it, as well as other projects. 50, to be exact. Yes, she had fifty projects all going at one time. I couldn’t believe it! And these were not small projects, either. They were all masterpieces, like the Peacock Tapestry. She said that she has 50 WIPs all at once, and she spends ten hours on each one before moving on to the next. And she has an order in which they are worked on (a rotation, as she calls it). Wow. I could never be that disciplined. I actually think if I had to stick to those rules, I would find stitching becomes a chore instead of the relaxing, enjoyable hobby that it is. What do you think? Could you force yourself to work for ten hours on a project, then put it away and know you couldn’t work on it again until you had stitched 49 other pieces for ten hours each? Not me! I have just one or two days left of stitching on the border of the Peacock Tapestry and then I will put it away for a while, but I will certainly get it out again whenever the mood strikes. The best part about stitching is that it is ME time, and when I have ME time I want to do whatever I want!