I have made a little bit of progress on the Alice in Wonderland SAL from CrossStitcher magazine. But not much. 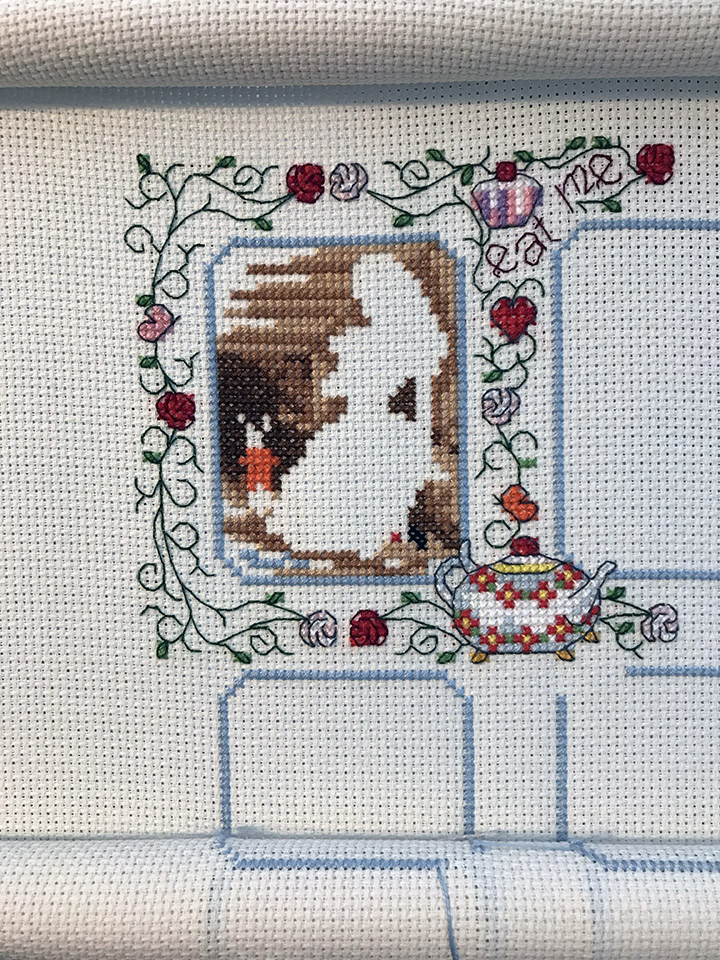 I don’t think I will have much chance to work on this until after the holidays, when the kids are back in school and things calm down a bit. But at least you can see Alice’s outline 🙂

This snowman is finished at last! It’s hot off the hoop – I didn’t even have a chance to iron it! I am not sure if I am going to display him in a hoop or make him into a flat ornament, but either way I am going to add white pom pom trim to the edge, just like the finished project in the magazine. Sometime after the kids get back to school I will try to find the time and energy to get this guy completed. No hurry, as we will have snow here into May, easily! 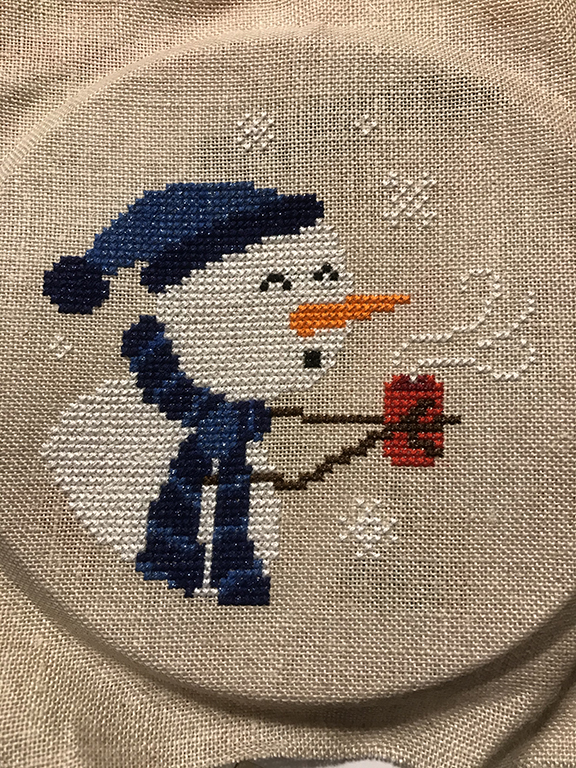 Ooh, I love how he is coming along! 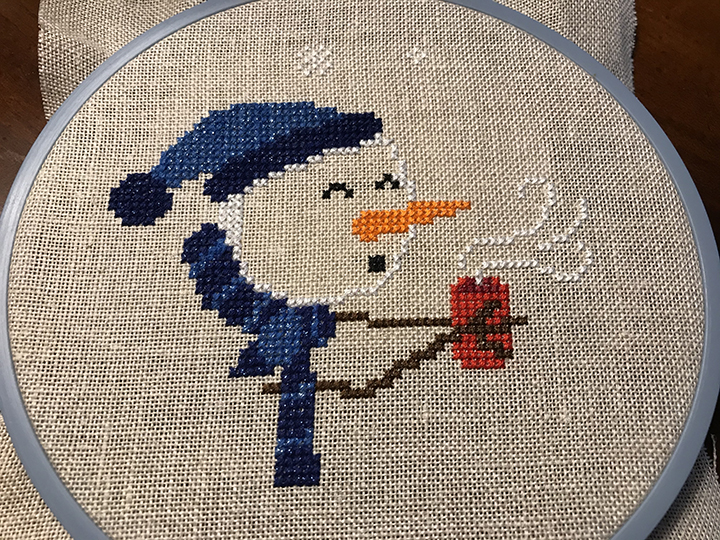 I took advantage of the long Thanksgiving weekend and decided to start a small new project. There was an adorable snowman pattern in the December 2020 issue of Just Cross Stitch that grabbed my attention. Although I HATE winter and snow (and unfortunately live in an area with 6+ months of it), this little guy was just too cute. It was one of the winners of the magazine’s annual Christmas Ornament Contest. The pattern was created by Caitlin Baerg and I have seen that lots of other people online are stitching this design.

I opted for a scrap of linen that was the same count and color as the model, but decided to swap out some of the threads. I only had one of the two Weeks Dye Works colors needed for the scarf, so I figured this project would be a great time to try out DMC’s Etoile threads. I didn’t have the other brand of floss at all, needed for the snowman’s body. So I decided to use DMC B5200 which is a brighter white than regular Blanc, and added a strand of Kreinik blending filament in 032 to make the snow really sparkle! 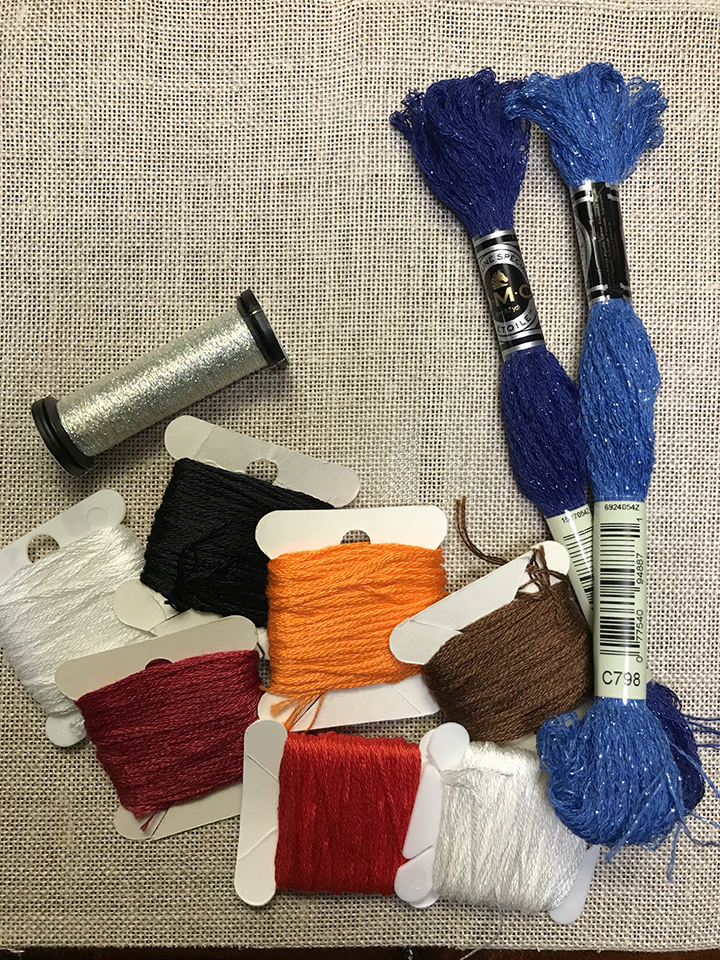 The Kreinik in the white floss shows up really well in person, but did not show up on the photo. I have only stitched the outline so far, because I was excited to get to work with the Etoile. I was not disappointed. I decided to use three strands instead of the two strands of regular DMC that I used for the other parts of the pattern. I just really wanted the snowman’s scarf to appear warm and thick. Not only did it turn out thick and fluffy, but the sparkle really shows. I did use Thread Heaven on the Etoile and Kreinik threads, and I think that helped a lot. After stitching one length with the Etoile, I decided to cut my lengths shorter. The three strands put together plus the roughness of the linen fabric really did a number on the floss as it was pulled through each hole. Towards the end of the length, it started to get frayed and worn out. 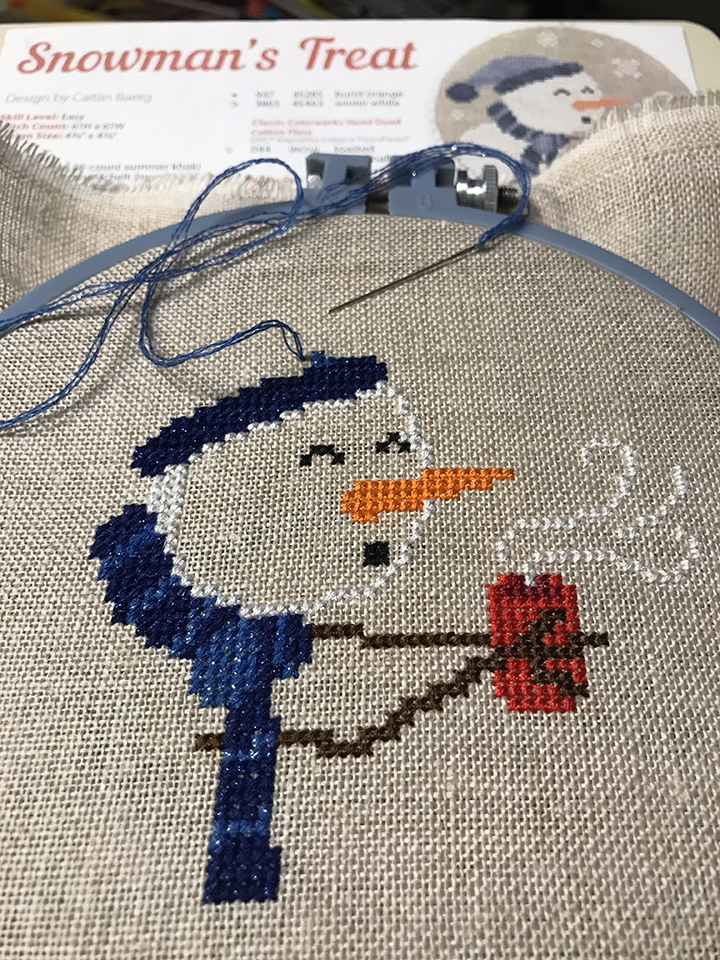 My stitching is still slow going. Compression gloves are helping a bit, and I think the act of stitching is helping my hands to not stiffen up as much. My neck still only allows me to stitch for a short period of time, but my goal is to get in about 30 minutes a day, 3 days a week right now. Unfortunately my neurologist has referred me to two neurosurgeons, one of which knew nothing and the other didn’t bother to take the referral. I found another doctor on my own just so he could look at my imaging, and he informed me that that second doctor was on his way out (retiring) and he would be very surprised if I got an appointment with him. The insurance company also refused to grant the MRI that my neurologist wanted. I am so glad we are into December and this year is almost over. I don’t make new year’s resolutions, but I am determined to have a happier, healthier 2021.