The White Rabbit was actually very fast and easy to stitch. I did leave off the beads and metallic backstitch (there will be a gold chain for his watch and buttons on his coat). Those will get added at the very end after all of the cross stitching is complete. I rather like this little cutie! 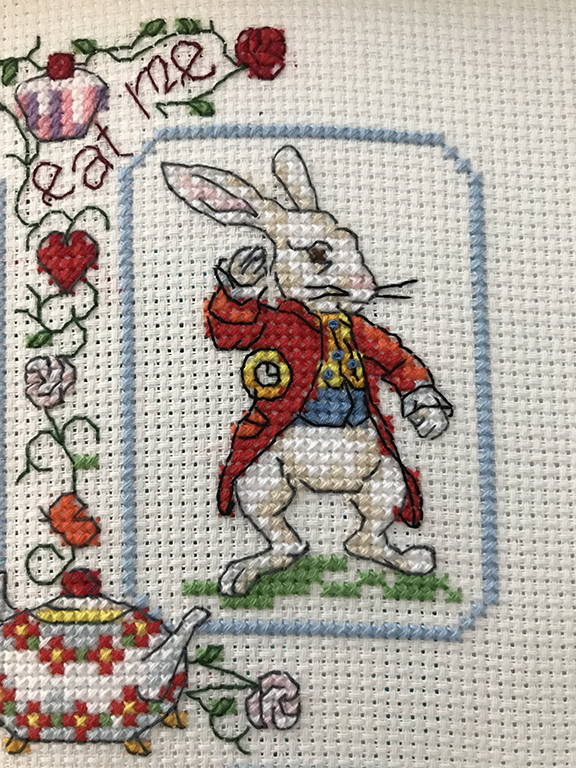 Here is the progress on Alice so far: 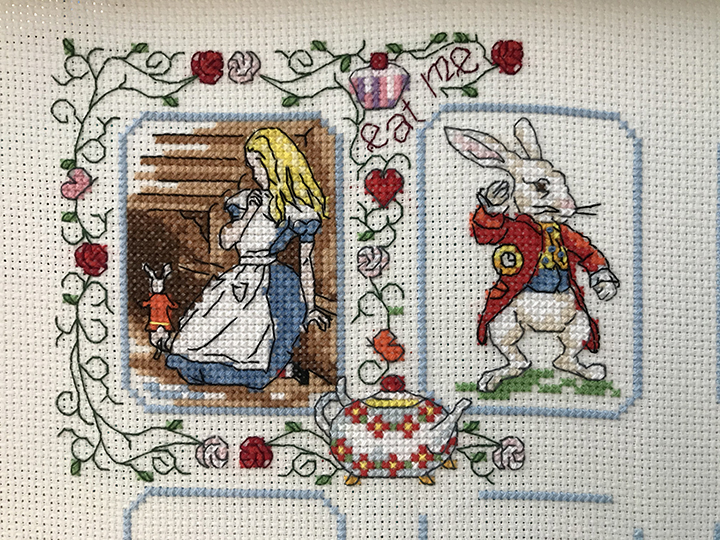 The missing backstitch on that one leaf to the left of the Rabbit is driving me nuts! I do think I will start on Square 3 because it is another small, quick character to stitch. But after that I am going to have to get back to all of the dreaded border work. If I have the patience, I may even make myself complete the border around and underneath the next set of 3 squares before I start on them. 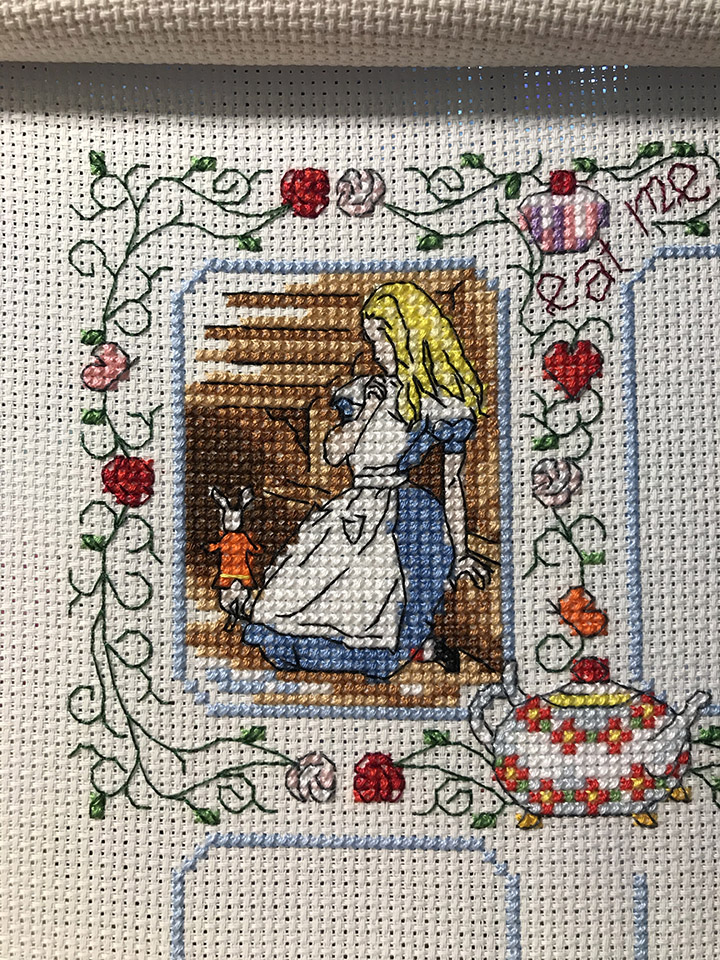 I’m so excited to have Alice complete. She is beautiful… but this backstitching is just awful. If I had known that none of it would be actually in the holes, I would have chosen to do this on evenweave fabric. But, I’ve come too far to start over. My fingers are really sore from pushing the needle through the middle of the Aida blocks, so I will have to find a sharper needle to use for the rest of the project.

Now that Oregon Trail is complete I am going to focus on the Alice SAL. I am so happy that I was able to finish off the cross stitch portion of the first square. 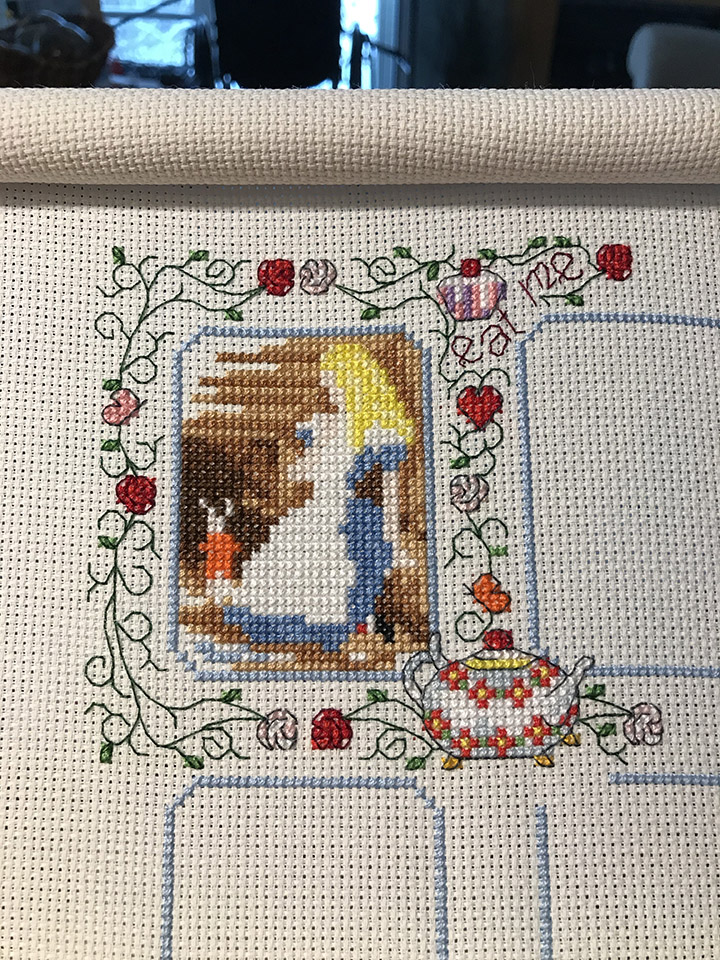 There is a Facebook group called 24 Hours of Cross Stitch, and a few times a year they put together a marathon stitching weekend for stitchers all over the world. This happened to be one of those weekends. Some people stitch for 24 hours nonstop, some people try to get in 24 hours total spread out over the course of Friday, Saturday, and Sunday. And then there’s people like me… who start Thursday evening, stitch as much as they can during the other 3 days, and still only get in a total of 7 or 8 hours. I can’t sit for very long at all, and I have constant neck pain. While I feel that the stitching motions are really good for keeping my hands from deteriorating, I can only do so much. I came up with a plan that seemed to work really well for me. I put a TV series on which consists of 22 minute long episodes. I stitch during an episode, then I have to get up to stretch, move around, get a drink, eat, use the bathroom, lie down, etc. I can get in a few of these 22 minute stretches in a day if I plan it out correctly. I know I will never be able to sit and do anything for 24 hours straight, but by doing 22 minutes at a time I am able to get in quite a bit of work. It also helps if the projects are easy and don’t require starting new threads every few stitches. The Oregon Trail was great for that, and didn’t require much counting. There won’t be another 24 hours of cross stitch for several months, and I am going to have to go back to stitching 0-2 hours per week. But it was fun to have a weekend (mostly) to myself and do something all for me for a change.

It’s complete! I had so much fun stitching this, although the neon floss was a pain to work with and made it take so much longer. I could have had this done in a weekend, easily, with normal DMC floss. But the neon green floss matches my T shirt perfectly! The regular floss would not have had the same WOW factor.  Now I just need to find a smaller wooden hoop and I think I will paint it black. I am also going to need to back the entire thing with black fabric or felt to ensure that light does not show through, as it is in this photo.

I have had this Rudolph cover kit from an issue of The World of Cross Stitching for a couple of years at least. I don’t even recall which issue it came with. But recently I found it and decided to give it a go even though it would not be ready before Christmas. It just seemed like such a cute little project, and quick to stitch. I worked on it during two weekends, then finally finished the backstitch today and mounted it into the card blank that it came with. I think he is so adorable and I’ll hang on to him until a future Christmas when I will send him to someone special. 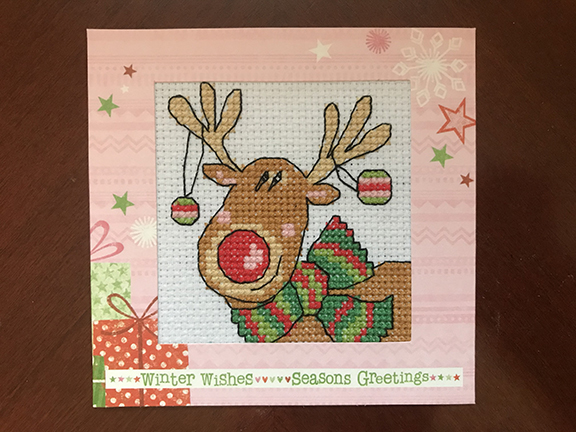 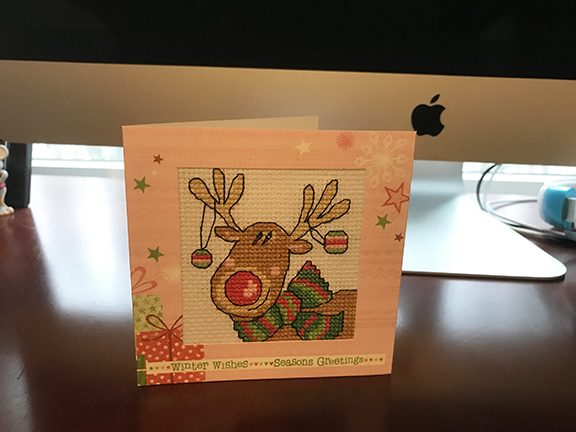 The finished cross stitch, without any backstitch: 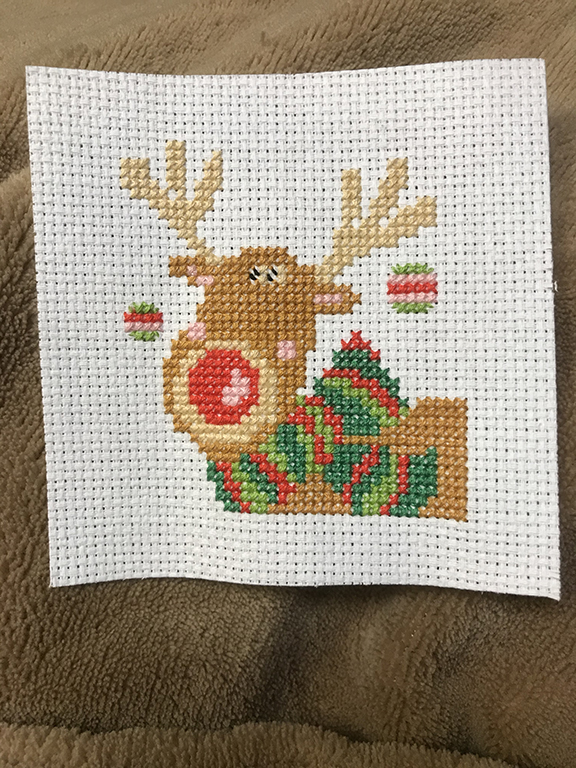 One of my favorite memories from childhood is playing Oregon Trail on an Apple II computer, complete with neon green text on a black screen. Those Apple computers were definitely the best part of going to school (we personally had a Commodore 64 at home). Recently, this game has had a sort of cult following, with all sorts of merchandise popping up relating to it. When I saw this T Shirt on Amazon, I had to have it. 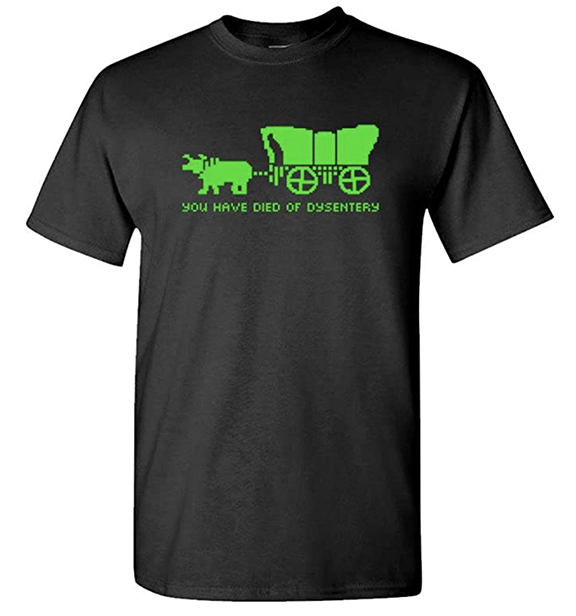 This got me wondering, were there any cross stitch patterns available with this design? A quick Google search found that although there were some finished pieces out there that had been sold on Etsy, no one was selling a pattern. But the design was so simple, I decided to try my hand at creating a pattern based on the T shirt and the few cross stitch Google images I found. I got out some graph paper and started shading in colored blocks with a pencil. It was pretty crude, but the end design seemed pretty accurate. I never stitch on black Aida because it is so hard to see the holes, but I decided to give this a try. And I happened to have one old (but new) package of Charles Craft black Aida in my stash. To give you an idea of how old it was, it was packaged in a clear round tube… they have not sold it that way in years! The tricky part was going to be finding a bright green shade of DMC floss that matched the T shirt. I looked at the entire line of DMC but nothing was bright enough… until I found the neon E990. I really did not want to work with Light Effects floss, as it is so finicky. But it was really the only bright green color that matched. So I dug out my old tub of Thread Heaven and got to work. 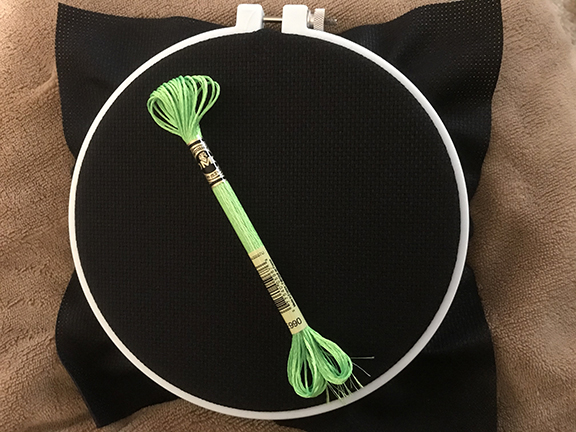 The floss was just as bad to work with as I thought, but luckily the pattern was super easy to follow and not very large. I got this done in just two days of stitching: 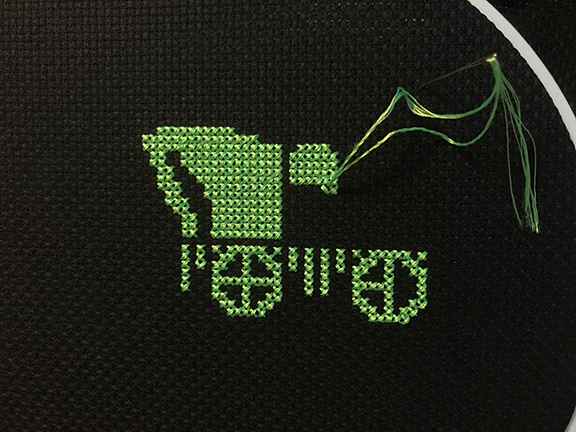 I just noticed while adding the photos that one of the spokes on the wheels is not complete. Glad I noticed that before I finished and framed the piece! I will be displaying it in a hoop which I will probably paint black.