I am fascinated with anything dealing with ancient Egypt. I have been collecting cross stitch charts on this topic for years, but never actually got around to stitching any of them. I have had this chart kitted up for about a year, but other projects always seemed to get in the way. Now I think it is time to dig out the materials that have been waiting, and get to work on Nefertiti. 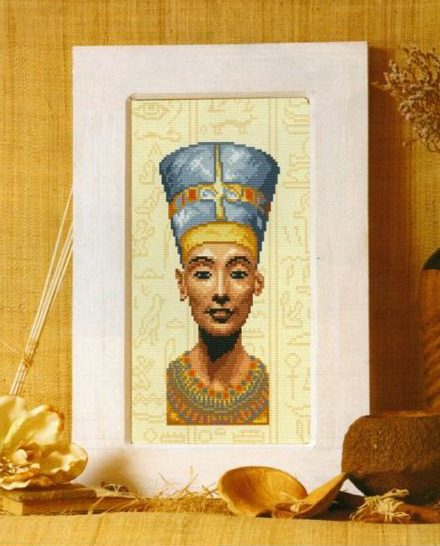 Nefertiti is probably the second most well known Egyptian woman, after Cleopatra. She was the “main” wife, if you will, of the Pharoah Akhenaten. Akhenaten ruled during the Eighteenth Dynasty of Egypt which was around 1300 BC. His name was originally Amenhotep IV but he changed it when he decided to become pretty much the first ruler in history to believe in only one god. He no longer wanted to worship Amun (the main god at the time) and decided that only the sun god Aten was worth worshiping. Nefertiti ruled along with her husband in one of Egypt’s wealthiest times. Unfortunately, she simply vanished from history. No one really knows what happened to her. Akhenaten also lost his mother (Queen Tiye, pronounced Tee) and a daughter around the same time. After Akhenaten died, Egypt got a new ruler… 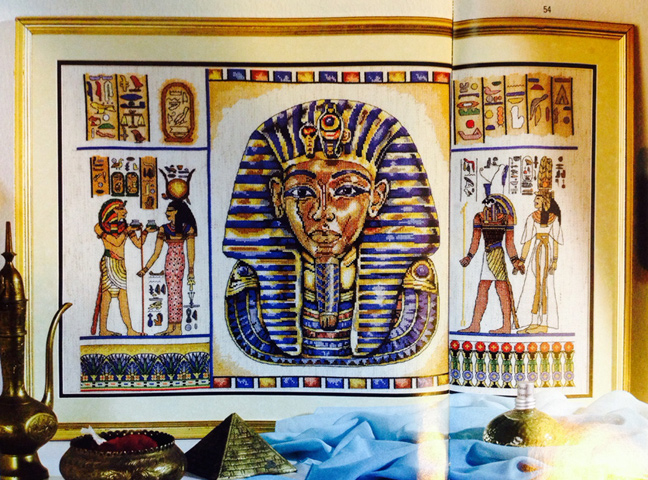 Tutankhamun. “King Tut” as he is called today was the son of Akhenaten and a woman who was probably Akhenaten’s sister. Yeah, I know. But in ancient Egypt the kings pretty much always married their sisters. You had to keep the royal blood lines flowing, right? This project pictured above is from a German cross stitch magazine called Burda Special (issue E732) and it is HUGE. We’re talking 25×15 inches on 14 count fabric. This is definitely a “way down the line” project for me. But it would be absolutely stunning! No designer is given for this chart, which is a shame. The gods on either side of Tutankhamun are not identified, but I am guessing the ones on the left are Atum and Hathor. On the right, the god is probably Horus. I actually have no idea who the 4th figure is. Her headdress looks like a combination of the single feather Ma’at (female) wore and the double plumed crown of Amun (male). But, this chart has definitely been on my “must stitch list” for a good two years or more now.