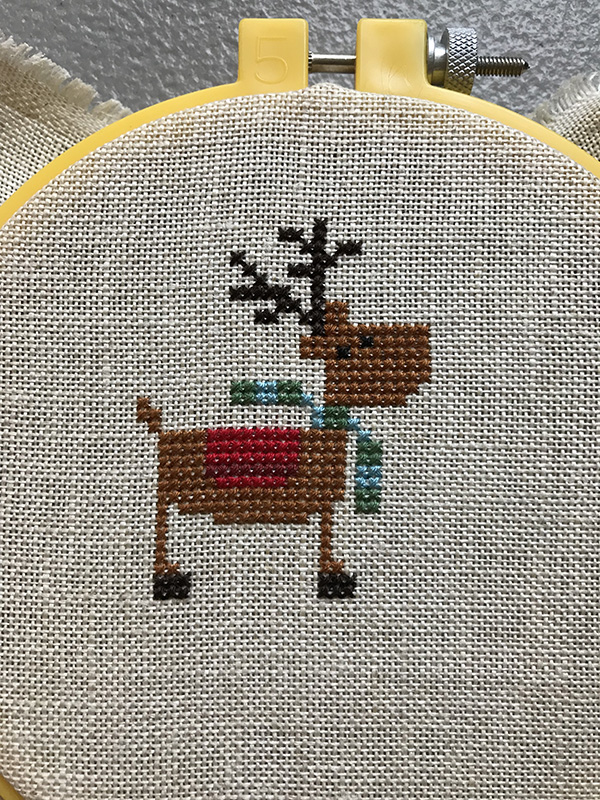 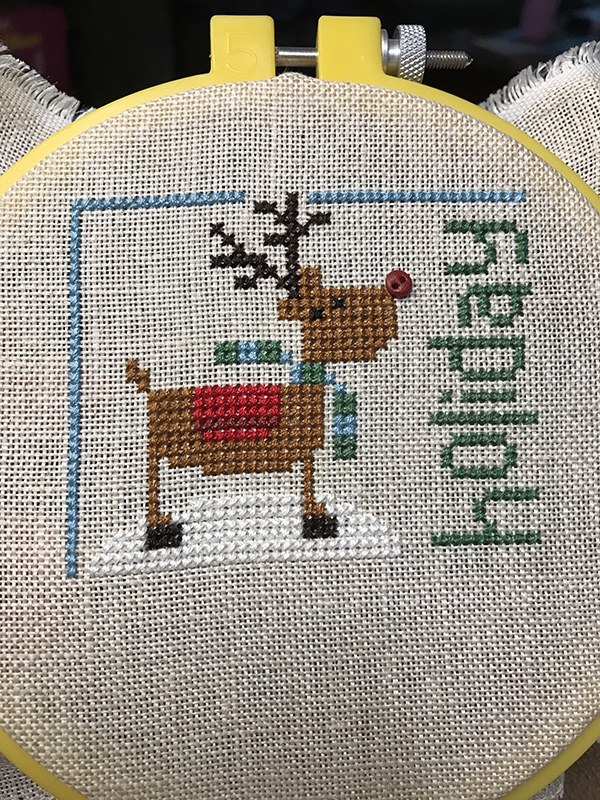 I have had so much fun stitching this Ho Ho Ho Rudolph from Lizzie*Kate! I did mess up on the counting on the snow pile, which made the border closer than it should have been. And I changed the border from white to blue so it would show up better. My fabric was apparently a lot lighter than the color in her stitched model. I also changed the stitched snowflakes to Mill Hill beads. 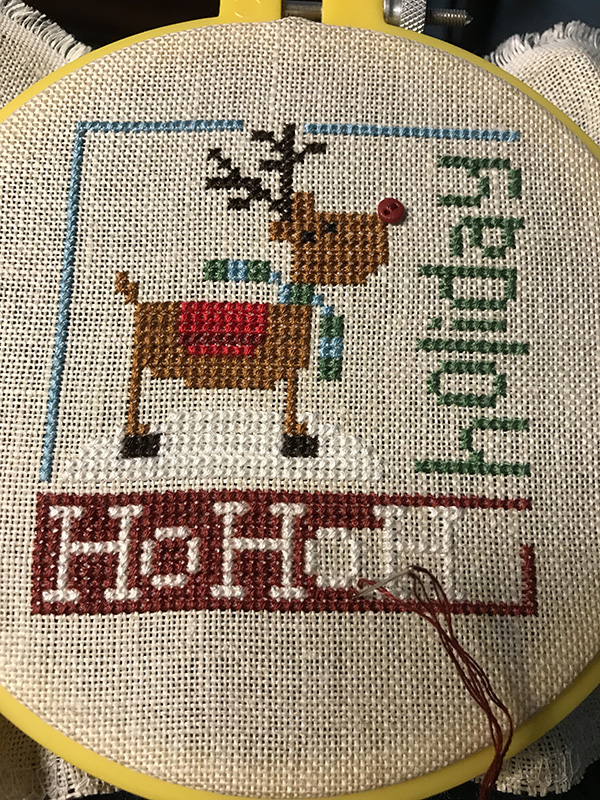 Now I just need to figure out how to finish this little guy off. I can’t decide between a flat fold (which I have actually never made before!), an ornament, or a mini pillow. I really don’t need any more tree decorations and I could use a bunch of mini pillows for decorating, so that is probably what I will go with. 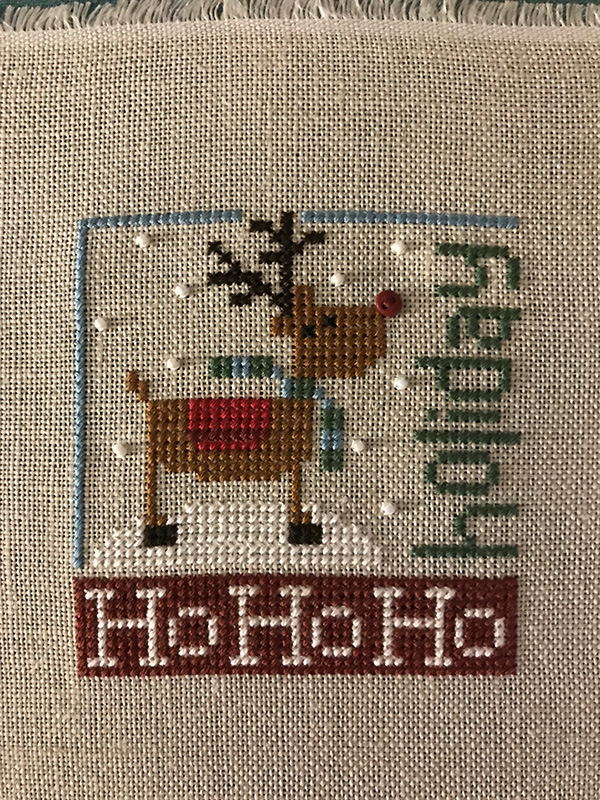 I just received an email from Wichelt Imports informing me of their NEW glow in the dark seed beads! 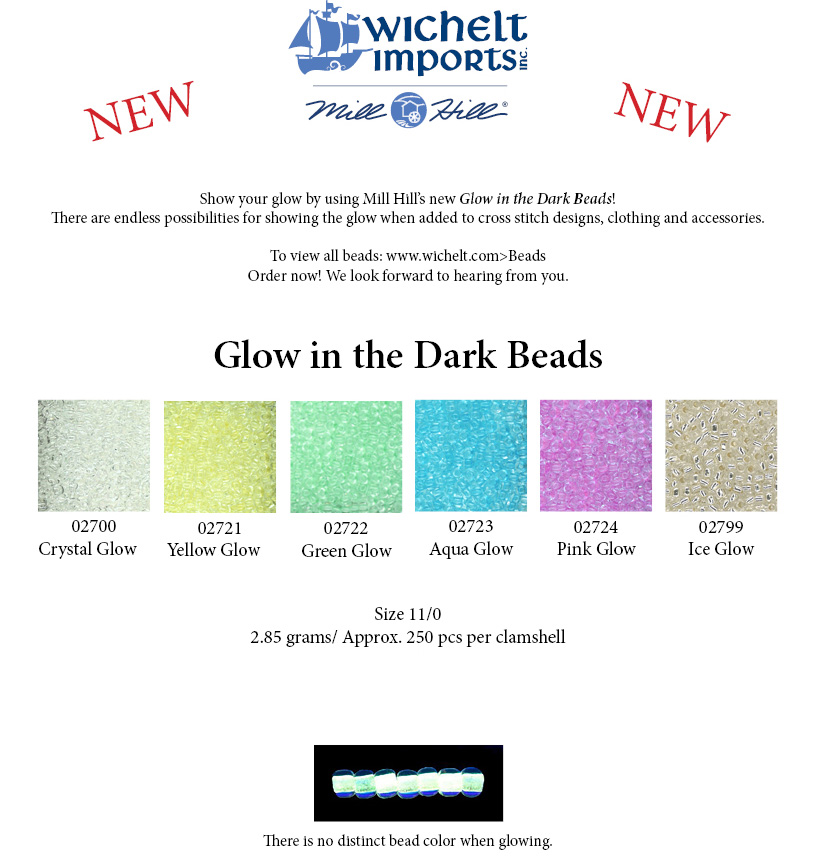 These could really be neat on Halloween or space themed designs.

While stocking the store I noticed that some of the Mill Hill beads I am getting in are not the same color as the last batch I received. Here are some examples. 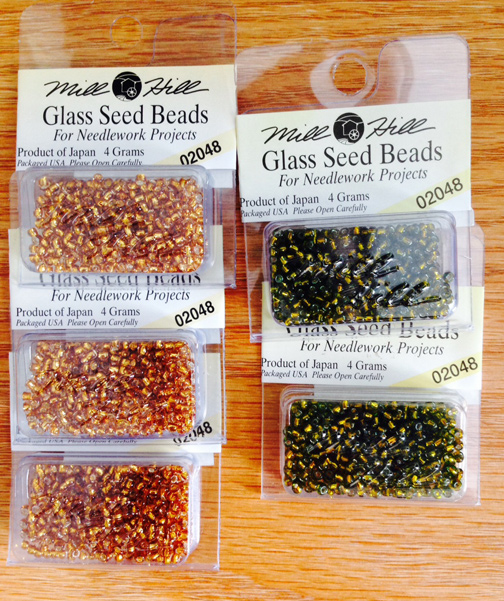 The beads on the right were the seed beads 02048 that I had in stock, and since I was down to 2 packs I ordered more. The ones on the left were what I received. A quick Google search found that stores selling online are divided on which image to use. While the photo above is my own, I found “swatches” from various stores that look like both. For instance, here are the images that are being used on 123Stitch and Stoney Creek’s websites.

Hmm, they look exactly like the beads I have! But which is “correct”? Since my website shows the darker color, I guess I will sell those until they are gone and then change the swatch to the lighter color. 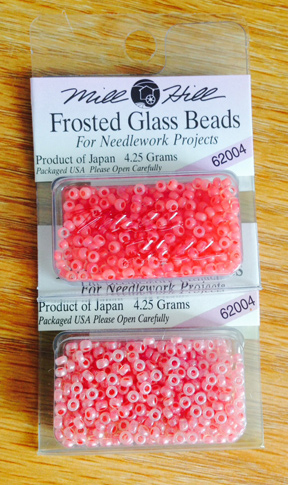 This is not the only color this has happened with. These pink beads 62004 were the first that I noticed. I even emailed Wichelt Imports (maker of the Mill Hill beads) to see if I had gotten a bad batch. I didn’t hear back, so I wrote again a couple of weeks later. Still no response. My guess is that the dye lots can be so different at times, they don’t really care. And maybe no one else does either. Maybe I am being overly “picky”. What bothers me the most is that if someone orders a large number of packages, I won’t be able to send them beads that all look the same.

The last example is of three different colors for one bead type. Since I only had one pack of the bottom color (what color? It looks almost clear!) I decided to just take that one out of stock. The rest will get sold based on how many packs each person needs, I guess. I am very conscientious, when someone places an order with my store, to send them all the same dye lots on things like beads and threads. But not all stores will check when filling your order. And if you run out during a project and need to order more, chances are the dye lots will be different by then. So let these pictures serve as a warning – ALWAYS BUY PLENTY OF BEADS OR THREADS BEFORE STARTING YOUR PROJECT! 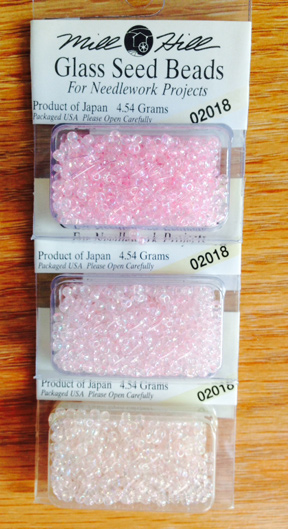 In a future post, I will talk about the color differences between dye lots in DMC floss.