Stitching has been just about the last thing on my mind lately. I thought bad things were supposed to happen in threes, but I guess not. Actually, the whole month of March has just stunk. It seems like nothing is going right. But there are definitely three “bad things” that stand out. A week ago vehicle #1 died. Okay, not the end of the world; we still had another one to drive. For about four days, that is. Yep, vehicle #2 decided not to start right when it was time to take the kids to school in the morning. Luckily my in-laws live nearby, and they let us use their car. We dropped the kids off at school and went new car shopping. We didn’t want to buy a new car when there was still so much snow on the ground (yes, it is almost April, and yes, we still have snow). But we didn’t have much choice, so we stopped at a few dealers and found something we could both agree on. We picked up the new car on Friday, the last day of school before Spring Break. And of course, the next day our daughter gets sick with a stomach bug. So I was up all night both Saturday and Sunday nights with her. Today (Monday) she was still throwing up and had stomach pains, so we decided to take her to the doctor. Our second trip in our new car was to the doctor’s office, keeping our fingers crossed that she would keep her breakfast down the whole way (she did!). We also dropped off vehicle #2 at the shop to get the battery/alternator/whatever is the problem looked at. Now my little girl is finally sleeping, so I was able to snap a picture of what little cross stitching I have done recently.

So here is my progress on Nefertiti for the past 10 days. I know, it’s pathetic. But at least it is something. I have no idea what is up with her ears. They are actually supposed to look like that. The one on (my) right looks really weird. My daughter noticed it as well. 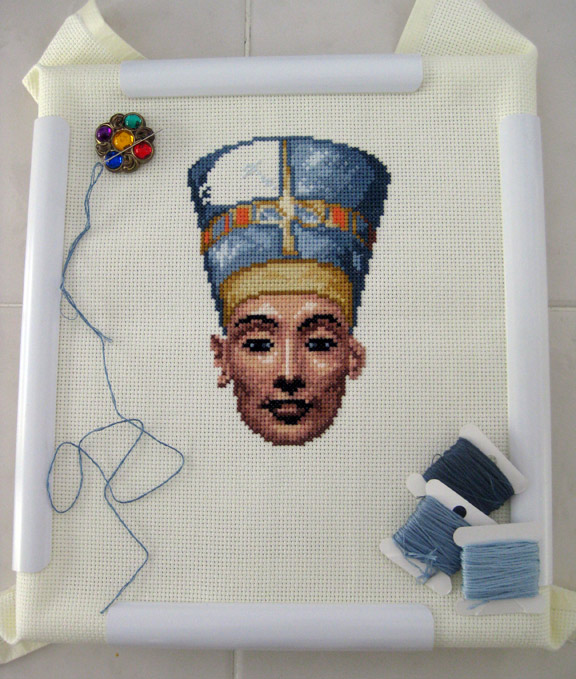