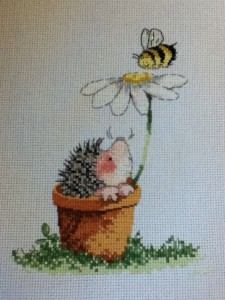 I thought this Margaret Sherry hedgehog design would be a quick stitch. WRONG! In 30 years of stitching I have never come across such bizarre stitch combinations. Instead of half cross stitches that take up half of the Aida square in a diagonal fashion, these take up half of the square in either a sideways or vertical way. That in itself would not have been a huge inconvenience, but in some areas there would be a half stitch and then a whole stitch, then another half stitch. This means that the whole stitch would be in half of one Aida block and half in the other. Crazy, right? Counting was really difficult for this chart and the backstitch was a pain as well. But I persevered and in the end I think this little guy turned out pretty well. I used Kreinik blending filament in 032 pearl for the bumblebee’s wings, instead of plain white DMC. I think it adds a nice sparkle.

Next up: Autumn Leaves by Janis Lockhart of Cross-Point Designs (Sep/Oct issue of Just Cross Stitch). 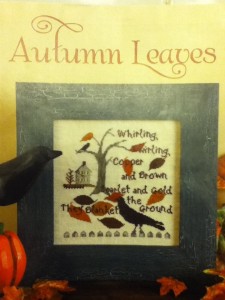